Yes, literally: whiskey rocks! But this article isn’t about whiskey rocking it – it’s about whiskey rocks aka whiskey stones, and do they work as they are supposed to work? Whisky industry and especially majority of whisky aficionados around the world are on war path against whiskey rocks. And I don’t blame them. Whiskey rocks didn’t sound convincing to me either, and there are lots of drams you just don’t mess with. You drink them neat or with few drops of water to change the aromas and palate feel better. I am fully aware of that – I consider myself a whisky enthusiast as well.

For me – whiskey rocks, or whisky rocks – call them with an e or without one – changed the way I drink whisky a bit. I’ll state my case a little bit later but let me give you some interesting science data about different methods cooling your drink. Meanwhile, if you are interested in buying whiskey rocks, check out the lowest price from here

Drink Hacker examined whiskey cubes (or is it spheres?), whiskey/drink stones and ice cubes. They ran some tests and here are the results:
They took 20ml of 80 proof imported vodka at room temperature, which was at 69.3 degrees Fahrenheit. They chilled the drink with similar volume of frozen material – all were fresh from the freezer at 1 degree Fahrenheit. They used ice cubes, drink stones and metal sphere. They measured the impact on vodka temperature for 1 minute, 5, 10 and 20 minutes.

Here’s what they found:

Here’s the original test made by Drink Hacker.

So according to those findings, ice cubes were initially the most effective at chilling the drink. Ice cube melts, and it melts rapidly, which makes a fast effect on cooling the drink. But melting also waters down the drink, which is bad especially with whisky. Many spirits even might change for better with water – and don’t get me wrong, even whisky might taste better with water – but not with lots of water as ice cubes tend to give. So a whiskey rock or a whiskey sphere is better for keeping the taste of whisky pleasant.

The whiskey tilt sphere was the least effective cooler at first: just because it doesn’t make much contact with a smaller volume of spirit. But surprisingly after 5 minutes in the glass, the tilting sphere won the ice cube. With a larger volume of liquid, the effects might be even better. Only bad thing is the size of the whiskey sphere. The large tilting sphere makes drinking a bit uncomfortable. Still, a nice trick for chilling a drink. For me, whiskey rocks have worked out fine, though. I guess it’s just a matter of taste.

I received my whisky rocks as a Father’s Day gift from my spouse and ever since I got the industrial/freezer smell out of them, I’ve been absolutely loving them. One of the best gifts I’ve had regarding whisky. The box contained 10 pieces of whisky rocks to put in the freezer and after a while in the freezer, to cool the whisky drink. 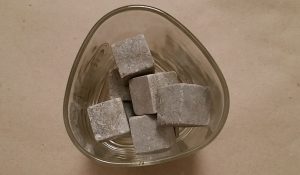 Whiskey rocks in my favorite tumbler

In my experience, ice will water down the whisky – making it worse. When people ask, why cooling your drink in the first place, if you’re a whisky enthusiast? Don’t you drink purely good whisky? Well, in my opinion every whisky is good. There are lots of good ones, mediocre ones and bad ones. But like the famous Finnish hard rock band called Peer Günt stated: “Bad whiskey is better than wine!” That’s just how I feel. I like even the “bad ones”, but they usually need something to make them better. Chilling without diluting the whisky is the way to go for me. Ice cubes dilute the whisky while melting, releasing near-frozen water into your whisky. This makes the taste of stingy alcohol stand out even more, while the nice pieces of the palate go away. So your whisky is cool but tastes even worse.

Whiskey rocks made out of soapstone or the new innovation called tilt chilling sphere (spheroid made out of metal) will cool your whisky, making the bad ones feel a bit better when chilled. And they do it without dilution, so the taste of whisky remains. So if the dram has even a tiny bit of those ingredients which make it whisky instead of just hard liquor – those ingredients will remain.

That’s why I am pro-whiskey rocks! They are not a fraud gift – at least in my opinion. What’s good about them, they don’t cost much.

And if you don’t still want to buy these stone ice cubes for whiskey, make your own drink stones by taking them from the nature. Like the Vikings and Scottish farmers did, taking drink stones from river banks. So you can literally make your own whiskey cubes.

You can buy whisky stones similar to which I had from here, check out the lowest price from here