How to store sealed whiskey bottles?

How to store opened whiskey bottles?

If you’re wondering a thing or two about storing whiskey, here’s a quick article and few tips on how to store whiskey. I got news for you: whiskey can take a hit if you don’t take few things to consideration. If a bottle of whiskey is properly sealed and stored, then you can store it free of worry. Because it will not go bad even if you decided to store it for hundreds of years. So relax, whiskey enthusiasts have a lot less to worry about when compared to wine drinkers. For example, wine ages in a bottle so it has an implied prior to date. Open wine bottles can deteriorate very easily, if you don’t take lots of things to consideration.

Whiskey has less stuff to worry about, because of its high alcohol content, which preserves it indefinitely. There are few things you have to think about. Let me list the important stuff.

Rule number one, which is valid for sealed and opened bottles of whiskey:

How to store sealed whiskey bottles?

Light and temperature are the main factors. Light and wide temperature fluctuations are big catalysts for chemical reactions in volatile compounds. These two factors will certainly degrade tasty esters and congeners in whiskey. Badly stored whiskey bottle will hold its alcohol per volume level (40% ABV for example), but the taste will suffer.

How to store opened whiskey bottles?

NB! Decanting whiskey is something I won’t recommend. At least with the good stuff. Decanting won’t necessarily harm your whiskey, unless the seal is not tight. But even with a good seal, I like to avoid unnecessary pouring. In my opinion, the best place for whiskey is its own bottle. Decanters look great, though. So if you still want to decant your whiskey, read more about whiskey decanters from this article.

Store your opened whiskey bottle with same principals, as the sealed one. Besides that, know a little bit about a process called oxidation. 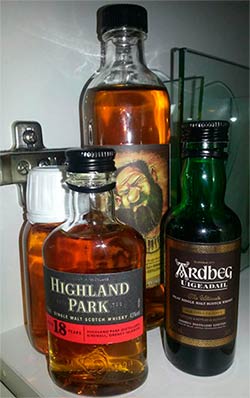 So what exactly is oxidation?

Remember that the process is slow, and that an inch or two of “headspace” in the bottle won’t make big exceptions on taste. At least for a year or so. But if at least 75% of the bottle is air, you are probably going to notice a degradation in quality in a quite short period of time. It may happen in a month. If you want to test this in rapid speed, leave a half glass of whisky overnight and taste it the next day.

There’s a nice little “rule” in whisky communities. When a whiskey bottle has hit the one-third mark, you invite a group of friends over to enjoy it. It’s nicer to share it with friends and fellow whisky enthusiasts, than to dwell on your misery, drinking the flat and tasteless whiskey all by yourself.

One method is to use an inert gas, like a wine preserver product. Those products will provide a protective layer between your the whisky and the oxygen. This protection will be lost every time you open the whiskey bottle so it’s wise to save the spray for open bottles that will remain untouched for awhile.

“How to keep hold of that whisky flavour without it fading over time.”

Tips on how to store whiskey
Go to top