Tullamore Dew is a legendary brand from Ireland – in fact it’s the second largest selling brand of Irish whiskey globally. They sell over 950 000 cases annually.

Produced by William Grant & Sons, this triple distilled blended Irish whiskey comes from Tullamore, from the County Offaly in Ireland. Where the old Tullamore Distillery was originally established in 1829. The original distillery closed down in 1954 and production was transferred to the Midleton Distillery in 1960’s.

60 years later production returned to Tullamore when in 2014 phase one of the new distillery construction was completed. This allowed malt and pot still whiskey production for the Tullamore Dew blend. Grain whiskey would still be sourced from Midleton distillery at County Cork. Installation of Coffey still, allowing the production of grain whiskey, will happen in phase two of the construction.

So this Tullamore DEW had some Midleton whiskey in it. 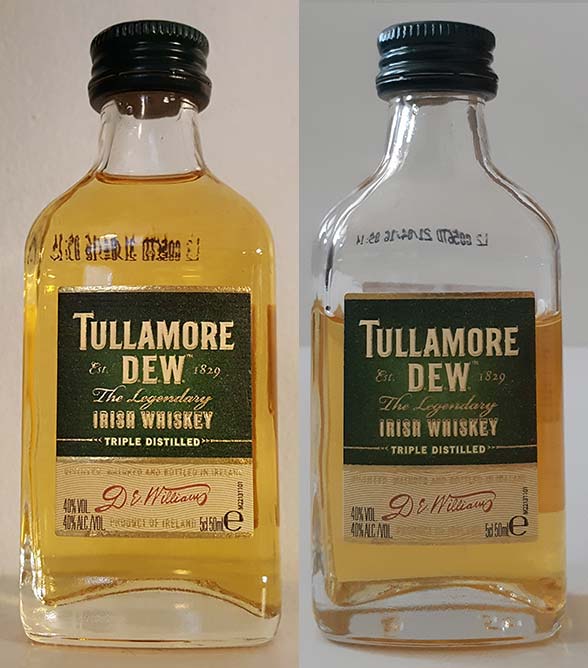 Angle’s share effect. Comparison of Tullamore DEW: same bottle on the right over 6 months after it was bought

ABV: 40%
Nose: Fruits and biscuits in a very mellow way. Quite grainy, Master of Malt described it as gristy and that’s spot on. Hints of caramel and toffee notes but the aromas are quite diluted.
Taste: Grain whisky dominates but fortunately the Midleton effect comes in a positive way. So even though malt and pot still whiskies aren’t dominating, there’s a pleasant taste of sherried fruits and toast. Thanks to Midleton. Very much cereal notes.
Finish: Mildly spicy with vanilla and grassy notes rising to the top. Very light finish, watery grains dominate.
Balance: Pleasant yet decent blend. Irish blends are usually quite enjoyable even when they taste like average. I think that’s the case with Tullamore Dew.