Michter’s US*1 is a single barrel straight rye whiskey from Kentucky. The brand name is old but Michter’s distillery is quite new. Resurrection of Michter’s brand started in 1990’s when Joseph J. Magliocco and Richard Newman decided to honor the Michter’s legacy by filing for its unused and abandoned trademark.

Before that Michter’s brand had gone through two shutdowns. One in 1919 because of prohibition. Another one in 1989, filing for bankruptcy. They recently expanded their distillery in Lousiville, Kentucky but the roots of Michter’s brand are in Pennsylvania:

“Originally known as Shenk’s and later as Bomberger’s, the whiskey company which ultimately became known as Michter’s was founded by John Shenk, a Swiss Mennonite farmer, in Schaefferstown, Pennsylvania in 1753. In its earliest days, Shenk’s produced whiskey from rye grain, a favorite local crop in the Pennsylvania Blue Mountain Valley where the distillery was located.”

Every bottle of Michter’s US*1 Rye Whiskey comes from a charred new American oak single barrel. The bottle in question came from barrel number L18B187. Bottled in 84.8 proof (42.4% alcohol by volume). 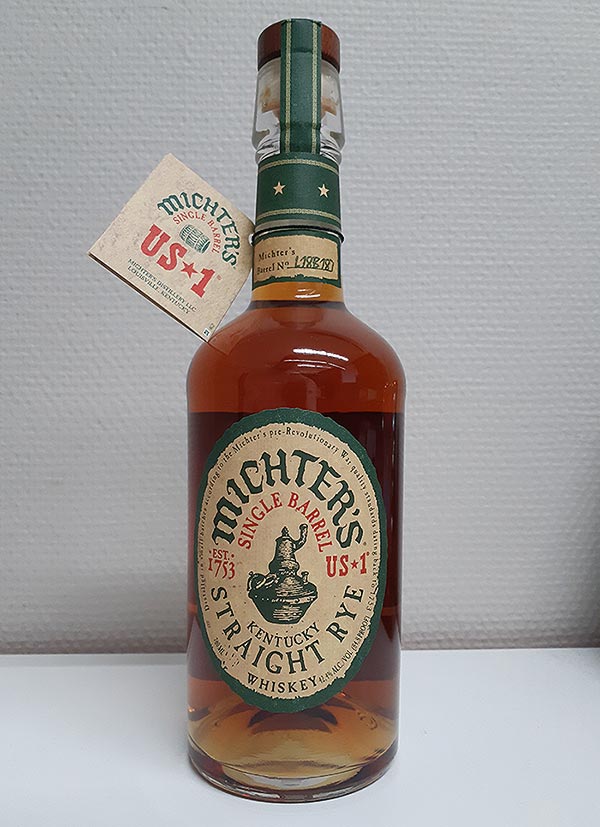 Even though Michter’s US*1 Rye doesn’t fall for the “ultimate favorites of WhiskyRant!” bracket, I like it. Being single barrel, there’s quality. What’s lacking is that amazing rye grain freshness that you tend to get when mash bill has high proportion of rye grain.

Taste-wise this isn’t my absolute favorites, but it surely is better than average. I can only recommend this one for rye whiskey aficionados!

ABV: 42.4%
Colour: Copper
Nose: Some citrus notes, lots of vanilla. Coconut milk with very waxy aromas, kinda like candle wax. Bit spicy, little bit of rye notes coming from the back. Drops of water bring more freshness, oak notes start to dominate. With a touch of sweet corn.
Taste: Vanilla with spices and oak. Rye notes start to rise. Palate is surprisingly smooth for a rye whiskey, and drops of water makes it even more smooth. Water brings out the oils and makes it like dark velvet made out of toffee.
Finish: Candy mixed with spices. Fresh oak dominates. Bit toasted, very bitter aftertaste. Funny how addition of water makes the palate even smoother but highlights even more of the bitterness of aftertaste.
Balance: For a rye whiskey, this one’s quite smooth. Nicely in balance, although I yearned for more fresh rye notes. Quality whiskey, even though I prefer minty ryes.