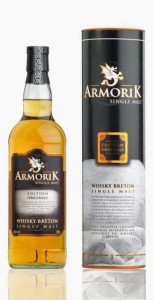 Armorik Edition Originale is a Breton Single Malt from France. It’s been double distilled in copper stills, made from local malted barley and granite filtered water from a well on the Armorik distillery. Matured mainly in ex-bourbon casks but also some refill ex-sherry butts are used. According to Armorik, it won a silver medal at the Los Angeles Spirits Competition in 2008. It has also earned 91 points from Jim Murray in his Whisky Bible, with a statement:

“one of the MOST IMPROVED malts in the world”.

For me, this French single malt felt very rugged, so presumably I got some of the older batches, when I ordered my sample. My sample was very light but harsh. Aromas and taste came across delicately, but with a strong alcohol effect, even though this Armorik has only 40% alcohol per volume. Very weird single malt, almost like Vanessa Paradis singing some kind of heavy metal version of  “Joe Le Taxi”.

This original edition by Armorik brought the French film Irreversible into my mind. Though I like the movie more, Both, the movie and the whisky gave me hints of delicate moments buried in the roughness. Irreversible is disturbingly violent throughout the movie, managing to demonstrate some softer side at the end as well. Irreversible tells the story in reverse-chronological order, so the softness is actually the start of the story, just like Armorik Edition Originale has it.

Old version of  Armorik Original, the one I think, I had

Taste: Lightly spicy with citrus dominating the palate. Oak and hints of toast.

Finish: Light taste, yet burns on your throat. Oak and malt are there in a rough way.

Balance: Very rugged single malt in a light palate, when it comes to taste. This has to be one of the earlier batches without the improvement, that