This is “The Orcadian Single Malt” called Scapa Skiren, a NAS (non-age stated) whisky from Scapa distillery. Released in 2015, distilled in the only remaining working Lomond Still in Scotch whisky industry.

Scapa Skiren has been aged in refill American oak casks. The one I got to taste was Batch SK11.

Bright sky but could be even brighter?

This single malt from Scapa is surprisingly good compared to its “statistics”. I was not expecting anything from it, because it’s a NAS with only 40% ABV.

Of course you can hypothesize, how much better Scapa would do with age stated or higher alcohol by volume NAS whisky. Would their range be even better?

But can’t complain too much, Skiren is surprisingly an okay dram.

Matured in:
Re-fill Ex-Bourbon casks
ABV: 40%
Colour: Golden amber
Nose: Ginger with honey and floral notes. Sweet vanilla meets fresh hay and summer meadows. Water adds butterscotch and cereal.
Taste: Round and creamy. Very simple, hard to get anything other than sweet, pleasant honey, vanilla and toffee. Addition of water doesn’t change the palate much. Adds some spices maybe.
Finish: Bit rough and one-sided, young spirit is presented. No character but still, a nice sweet and mellow whisky. Gets spicier with drops of water.
Balance: Aromas are great but the palate needs some more character. Quite easy to drink but bit one-sided. 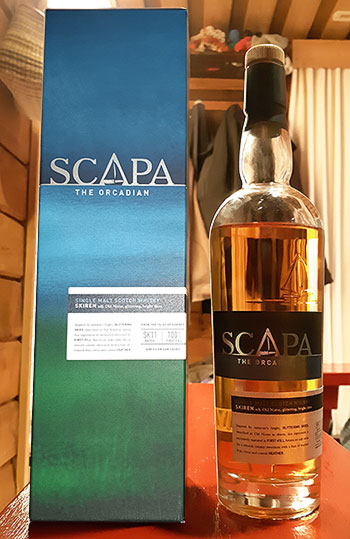