Many people state that Benromach 10 year old single malt is a great value for money whisky – a bang for buck single malt ever since it was released in late 2009. This core range product comes with nice 43% alcohol per volume level and there is also a cask strength version available. Benromach also has a heavily peated whisky in their catalog. So good things happening for Gordon and MacPhail’s Benromach distillery. 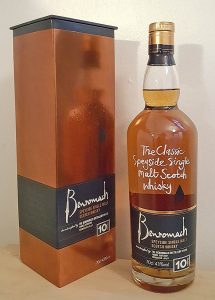 The distillery was founded in 1898 however because of the depression in the Scotch whisky industry, they started producing whisky until 1900 just to be closed down in the same year due to a lack of money. In 1911 Harvey McNair & Co in London acquired Benromach distillery and the production really started to take place. 1983 the distillery was officially closed under the management of Scottish Malt Distillers Ltd. Fortunately in 1993 Gordon and MacPhail took over and helped to restore the site – opening Benromach’s doors in 1998 for whisky production. So it’s been a bumpy ride but with bottlings like this 10YO, hopefully the whisky production will carry on!

The Benromach 10YO whisky has been matured for the first 9 years in bourbon (80%) and sherry casks (20%) before finishing “marriage” in Oloroso sherry casks for 1 year. All the casks are first-fill casks and the whisky is lightly chill filtrated. It surely has become a classic Speyside dram in a short period of time. It won gold at the World Whisky Awards 2014, in the “Best Speyside Single Malt – 12 years and under” category.

Orange County in a bottle

When thinking of movies, Orange County comes to mind with Benromach 10YO. This dram has lots of oranges in the nose and taste. The main character (Shaun Brumder played by Colin Hanks) is intelligent, yet carefree, which kinda sounds like Benromach distillery. Benromach prefer slow fermentation and distillation with little or no use of technology during production. Somehow the character of Shaun, trying to escape his superficial life in Orange County, sounds a lot like he’s trying to get to the point where Benromach distillery is – doing things in an earthly way.

Matured in:
80% Ex-Bourbon and 20% Ex-Sherry casks with one year finish in Ex-Sherry Oloroso casks
Colour: Golden amber
Nose: Oranges and hints of sherry. Few drops of water gives orange marmalade, red grapefruit and hints of marzipan. Drops of water also make the sherry notes stronger. Like sherry punch with lots of ripe red fruits.
Taste: Orange peel and bitter fruits and berries. Malty cereal starts to show when you let it rest in the glass. Drops of water make it mellow and juicy, yet with a crispy bitter aftertaste. Very sweet and tasty water melon mixed with stingy grapefruit and sherry.
Finish: Quite warming with bitter berries, oak and hints of spices. Good malty aftertaste, yet I’d prefer it to be longer.
Balance: Exciting and fresh, not in best balance though. But very vibrant. And did I say exciting?

Did you know?
Benromach’s annual output of cask strength whisky is somewhere between 150 000 and 250 000 liters. The distillery uses only first-fill casks for maturation. They store the casks in traditional dunnage warehouses, which are lower-set buildings with dirt floors and stone walls. The reason for this is better air circulation and humidity control. 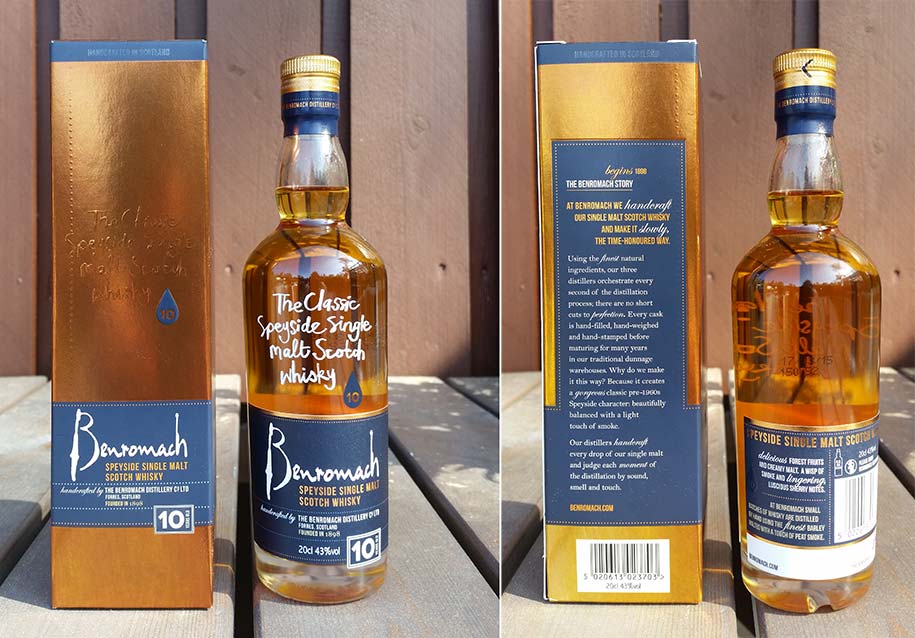 I sampled Benromach 10 with a 0,2 liter bottle

Ralfy’s review of Benromach 10YO with old labeling: