Finlaggan Old Reserve is another “bang for the buck whisky” for “peatheads” like me. It comes from Islay and is bottled by The Vintage Malt Whisky Company, but nothing else is being told about the whisky. Even the maturation is a guarded secret, but I’d guess it to be Ex-Bourbon casks. 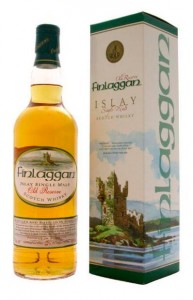 The mystery of Finlaggan is strong so if it’s a marketing trick, it has worked out well. Of course the fact that you can get an Islay malt with just a little bit over 20 euros, makes this whisky popular amongst whisky enthusiasts. There’s no distillery called Finlaggan in Scotland, or even in Islay. The name comes from the Finlaggan castle ruins, which used to be the command center of Lord of the Isles. Speculation about the secret distillery can be found here.

THE SORCERER’S APPRENTICE on a training period

Finlaggan Old Reserve has peat written all over it. Even to a point, where it started to feel a bit one-sided. Especially the nose felt dull, even though it was strong, which is the way I like it. So, 20 points from the nose by me is not a good score, when we’re talking about peated whiskies.

If I had to guess the source of this Islay whisky, I’d say it’s a young Lagavulin or Laphroaig, because of the iodine feel. Probably more Laphroaig than Lagavulin. Finlaggan Old Reserve is definitely like The Sorcerer’s Apprentice. You’re expecting some magic to happen, but unfortunately the training period ended too quickly. This whisky needs more maturation.

Colour: Sunlight
Nose: Starts with hints of ashtray, which are not so nice. Turns into nice burnt coal, but then the strong peat starts to dominate too much. The peat doesn’t fade away, it’s all about the peat.
Taste: Earthy notes with peat and some iodine effect as well. Sweet notes are present with a hue of oak.
Finish: Surprisingly quick. Sweet peat flashes by with hints of dry oak. Weird that the aftertaste is so short when compared to the strong nose and powerful taste.
Balance: Feels very young – needs more maturation. Like a prototype of some finer peated Islay whisky. But because of my peat fanaticism, I still like it. I guess you’re always a winner in my book, if you’re manufacturing peaty stuff.