I’M GOING HOME without it

Glenfiddich 15 yrs is matured in American bourbon, Portuguese sherry and virgin oak casks. Then married in a huge Solera vat, which has once had Solera sherry in it. Solera literally means “on the ground” in Spanish. Referring to the lower level of the set of barrels or other containers used in the process. 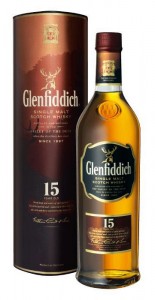 Even though a lot of different intriguing steps in the process, this whisky manages to fall flat just like the 12 year old. One good thing about it, it’s better than Glenfiddich 12 yrs. Still, I guess I won’t be tasting much of their products anymore…

Nose: Sherry with dry citrus and oak. The aromas are okay but unfortunately the best part of this dram.

Taste: Sweet yet spicy and dry. Sherry and oak are present but somehow it feels like all the processing seems to cancel each flavor out. There’s no character, nothing to really cling on to.

Finish: Dried fruits and raisins. Oak is dominating. Oily but not as full of oil as the 12 year old.

Balance: Medium body with dry sherry appeal, that just doesn’t do it for me. More exotic than Glenfiddich 12 yrs but like their younger dram, without character.

Edit: I recently tried this dram again and I had to make the score higher. My first impressions gave this dram a much lower score but since then I’ve learned to like it a bit more. Still, in my opinion, a generic whisky but I have to admit I was too harsh for it, scoring it even lower than 70 points. My bad experiences with Glenfiddich 12 yrs probably had too much of an effect in my opinions about the 15 year old.