For the European travel retail market, Highland Park released 6 different NAS (no age statement) whiskies: Svein, Einar, Harald, Sigurd, Ragnavald and Thorfinn (in order of price). Named after a legendary Viking leader Svein, who was also known for his generous nature and hospitality, as well as his fiery temper. 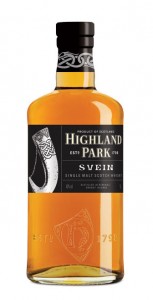 Highland Park Svein has been matured mostly in American oak casks. About 30% of the casks used were first fill. Svein is like the leader it was named after. Delicate and at some points, fiery. Better than Harald, which felt a bit too flat and delicate for me.

Then again, Highland Park Svein is definitely lighter, when compared to Einar of the Warrior Series. It’s like a young viking boy – full of barley. Reminds me of the movie Pathfinder. In the story, a young viking boy is seeking his place. Svein is kinda like him. In the middle class of the 3 Warriors, I got a chance to taste. Not yet complete, but on its way there.

Check out my tasting notes of Highland Park Svein below and if you want to buy the whisky from Amazon, there’s search bar widget below the tasting notes.

Matured in:
Ex-Bourbon casks
Colour: Pale straw
Nose: Delicate floral notes with hints of peat and some of that signature Highland Park smoke buried deep on the back. Citrus and especially the barley comes through nicely.
Taste: Sweet vanilla dominates. Oak and barley stay on the back. Lighter palate than Harald but not as strong as Einar.
Finish: Strong oak takes by force. Bit floral and earthy with lingering spices.
Balance: Differs from the other two of the first three Warriors. Even though it has that similar kind of deep HP smoke like Einar has. Nice dram.