Highland Park has released six NAS (no age statement) whiskies for their Warrior Series, made for European travel retail market: Svein, Einar, Harald, Sigurd, Ragnavald and Thorfinn (in order of price). Named after Einar, one of the most feared vikings of his time. Einar was tough and successful, making lots of treacherous long voyages. He also ruled over Orkney, where the Highland Park distillery is located. 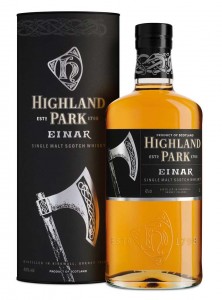 Highland Park Einar has been matured in American and European oak casks – mostly American. From the first three of the Warrior Series, this one lives up to its name the most. Harald is light and Svein in the middle of them. Very strong character and representing the Highland Park brand with good results.

Was I drinking with VIKINGS?

Highland Park Einar shows the warrior side very well. Strong aromas and taste, in good balance, offering lots of character and little bit of complexity as well. Almost as good as the TV series Vikings. This half American, half European whisky (by maturation) made me feel like I was enjoying a dram with real vikings.

Especially the finish makes Einar what it is, a strong contender in the top notch Highland Park whiskies.

Matured in:
Ex-Bourbon and Ex-Sherry casks
Colour: Pale straw
Nose: Like Harald, floral and earthy. But with some of that sophisticated, signature HP wood smoke. Toffee and barley are also nicely present.
Taste: Salty with and spices, citrus and barley. Very smooth, waiting for the big finish.
Finish: Lasts long, fruity with sweet vanilla. And yet again, that great, sophisticated deep smoke á la Highland Park is there.
Balance: True Highland Park crafting. I read somewhere, that this is more like an autumn whisky, unlike it’s brothers Harald and Svein, better suitable for summer. I agree with that statement. This surely is closer to a warrior, than the other two.