Few years ago, Balblair wanted to be different by replacing age-statement with vintages, like we are used to in wine. I got a chance to taste the 2nd release of Balblair Vintage 1997, matured in first fill American oak, Ex-Bourbon barrels since 1997. According to them, they are the oldest distillery in Highland, established in 1790. Single malt whisky holds only 15% from their production. 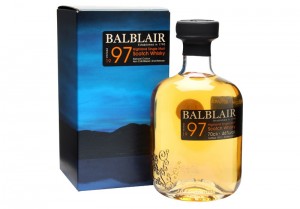 THE GRAPES OF WRATH – but I like them a lot

I managed to screw up my tasting of the 1989 Vintage by adding too much water in it. With the ’97, everything went well. The Grapes of Wrath came to my mind, while trying this vintage by Balblair. I didn’t feel the wrath (well, just a wee bit in the aftertaste), but I did feel grapes and a palate, which could very well become a classic. Just like the movie in question. Actually, I’m starting to think, that each one of those Balblairs with a vintage in it, is a classic.

The grapes are surely there and there’s a little bit of wrath in the bitter aftertaste but I still like the full and fruity palate of this one. So I guess the grapes of pleasure would be more appropriate statement on Balblair 1997.

And because of the price, Balblair 1997 almost is from the era where Grapes of Wrath took place, the Great Depression. Yes, I am exaggerating, because it’s not that cheap. But compared to the low percentage of single malts in Balblair production and the quality, the price is reasonable.

Matured in:
Ex-Bourbon casks
Colour: Golden amber
Nose: The barley is strong in this one. Comes with a touch of fresh fruits. Great mix of pineapple, apricot and lemon. Good nose, and it gets better!
Taste: Sweet and very full. Strong with notes of green fruits: grapefruits, pears and apples very much present. Gentle oak and spices seal the deal nicely.
Finish: Long lasting but unfortunately not as good as the taste. Bitter with a lemony feel and hints of peat and spices.
Balance: Sweet, full with a touch of bitterness. Too much bitter always messes up the palate for me, but this was on the edge. Good whisky, though. As you can see below, the bitterness didn’t affect much on the score. Great dram.