Kilchoman is a young, promising farm distillery in Islay. Started at 2005, Kilchoman Loch Gorm 2013 release was also their first release of this sherry cask matured, peated single malt whisky. Kilchoman is a small distillery with 90 000 litre capacity per year. They are one of the 6 Scottish distillers, who still do traditional floor-malting. In some releases, like Inaugural 100% Islay, they have all parts of the whisky making process – growing barley, malting, distilling, maturing and bottling – carried out at the farm distillery in Islay. 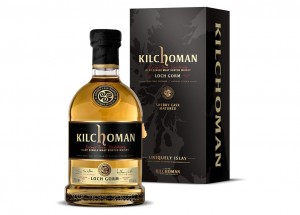 Kilchoman Loch Gorm has been matured in Ex-Sherry casks for 5 years before bottling. What’s interesting, is the fact, that it’s been matured most of the time in Oloroso butts, yet finished in Oloroso hogsheads. For “added depth of flavour”. Released worldwide in 2013, limited to 10 000 bottles.

A sweet shell but inside, there’s a RAGING BULL

Kilchoman Loch Gorm is characteristic and smooth. Like a much younger version of Lagavulin 16YO. Like a good dram, it is feisty and sweet at the same time. Reminding me of the great “Sugar Ray” Robinson, a boxing legend, who was a feared gentleman in the ring. And had an interest for dancing, especially for ballet. Since I haven’t found a fictional film about the original “Sugar Ray”, I have to make a reference to Scorsese’s Raging Bull. In that film, Sugar Ray appears as one of the characters.

Raging Bull is actually a good describer of Kilchoman Loch Gorm. Under its sweet surface, there’s a sophisticated but raging core of smoke and spices.

Matured in:
Ex-Sherry Oloroso butts, finished 2 months in Oloroso hogsheads
Colour: Pale gold
Nose: Syrupy with hints of honey liquor. Almonds and peat are present as well. And last but not least, under the nice sweet surface, lays delicate smoke with spicy tones.
Taste: Great combo of sophisticated smoke and nicely sweet sherry. The sherry notes resemble wine. Great clash of two completely different tastes. Hints of oak in the mix.
Finish: Peppery with oak and hints of peat. Nicely long with spices and dryness too. Simple but good and long ending.
Balance: Interesting mix. Even though the palate isn’t complex, it has a nice marriage of sherry notes and smoke. Both main characters complete each other very well. I’d state this as Kilchoman’s flagship whisky.

88
Nose:Taste:Finish:Balance:
21
22
23
22
Distillery: Kilchoman Region: Islay ABV: 46% Non-chill filtered, no added colour
Did you know?
They started their whisky production in 2005, being the first distillery to be built on Islay, Scotland in 124 years. They were also the most westerly Scottish distillery until Abhainn Dearg distillery began whisky making on the Isle of Lewis in 2007.
Go to top