Kilchoman Machir Bay is a young peated and sherry cask finished malt by the newest distillery in Islay, Kilchoman. They started in 2005 and by doing so, they were the first distillery built on the region of Islay in 124 years. Kilchoman is a farm distillery, so in some releases all parts of the process – growing barley, malting, distilling, maturing and bottling – are carried out by them.

This Machir Bay was released in 2012. It contains 60% of 3 year old, 35% of 4 year old and 5% of 5 year old malt whisky. All aged in first-fill Ex-Bourbon barrels. Before the vatting, Machir Bay was finished in Oloroso sherry butt for 2 months. 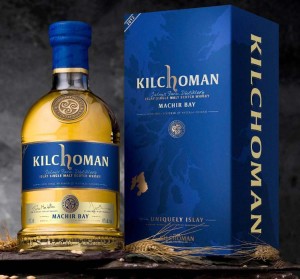 I’ve tasted two other Kilchomans (100% Islay and Loch Gorm) and I must say, they were much better. The young age does show in Machir Bay 2012 release – and it doesn’t show in a good way. This whisky has a good start with its eccentric aromas, but after that, it is a flat ride all the way.

Kilchoman Machir Bay 2012 is like the movie Young Guns. The potential shows in there, but it’s still a draft version. There’s not enough character and balance in the uncut talent. This is a good start by the newest member of smoky Islay, an okay young dram. And coming from interesting distillery like Kilchoman, you and I have to keep on track of their production in the future.

Matured in:
Ex-Bourbon casks, finished 2 months in Ex-sherry butts
Colour: Sunlight
Nose: Salty smoke with nicely sweet malty notes. Those nice aromas turn into sharp vinegar and lemon notes. Very interesting nose and a promising start.
Taste: Oak and dryness with spicy notes. A nice little mix of spices and peat with a hints of bittersweet notes. But that’s pretty much it – small trails of smoke are present but otherwise, pretty flat palate. Every taste stays retreated.
Finish: Good length, especially for a dram this young.  Salty and tangy with a fast fading smokiness.
Balance: Of course the lack of heavy smoke is bit disappointing, then again, this is fairly young whisky for thath kind of expectations. But there’s not much other characters either. I was amazed, that some reviews (Master of Malt for example) find this complex, I didn’t. Still, a decent single malt whisky by the up-and-coming, exciting distillery.

78
Nose:Taste:Finish:Balance:
21
19
19
19
Distillery: Kilchoman Region: Islay ABV: 46% Non-chill filtered, no added colour
Did you know?
Kilchoman distillery has a 90 000 litre capacity per year. They do traditional floor-malting, which is a method, only six Scottish distilleries carry out nowadays.
Go to top