This review is about the 5th Release of Kilkerran Work In Progress Sherry Wood, a product from Glengyle distillery in Campbeltown region. They also make Work In Progress Bourbon Wood. This series is a great way of seeing how the whisky is developing. They are working their way towards Kilkerran 12 year old, releasing another WIP each year. The 5th of the series was released in 2013, with 9000 bottles available worldwide. You can see all the releases from here. 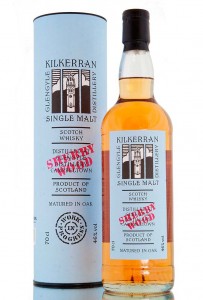 The whisky from the re-opened Glengyle distillery is bottling under the name of Kilkerran because the name is owned by Loch Lomond Distillers, and used for their vatted malt. Kilkerran is Scottish Gaelic: Ceann Loch Cille Chiarain, meaning the “head of the lake of Saint Kieran’s cell”.

Like I mentioned before, Work In Progress is a nice theme, showing how their relatively youthful spirit is ageing. It would be interesting to have a tasting of the first 6 releases of each style so far. Kilkerran Work In Progress Sherry Wood 5th release has been aged for 9 years, at least according to Serge from Whiskyfun.com.

The spirit of YOUNGBLOOD – a positive upset

Kilkerran WIP 5 Sherry Wood does show its young age, yet managing to be nicely sophisticated. Like expected, the sherry notes do not hit so strongly. Which suits well for my palate. I did score a much lower score at first, but after examining it a bit more – a while in the nosing glass and a drop of of water – it got better.

This dram reminds me of the movie Youngblood – a story of a promising hockey player making it as a professional against all odds. Like Dean Youngblood in the movie, sherry cask matured relatively young whisky didn’t sound any good in theory. And it didn’t start well. But after a while, in the “third act”, Kilkerran WIP 5 Sherry Wood started to fight back, and earned its position in my “okay category”, which is over 80 points.

Seems to me that the brand of Kilkerran is on its way to greatness.

Matured in:
Ex-Bourbon casks
Colour: Young Sauternes
Nose: Starts very sharp, like paint chips. Sweet sherry with tangy peat starts to rise. Hints of cereal and some oak and rubber notes.
Taste: Nuts with sweet notes at first, turning bitter, dark chocolate and dried fruits. One drop of water and some time in the glass improves the taste. Smooth, nicely (not over the top) sweet with hints of sophisticated smoke buried deep on the back.
Finish: Nicely lingering dry oak with some sweetness in the mix.
Balance: Shows the young age, especially in the nose. Give it some time in the glass to get the sharp edges away and make it more rich.

81
Nose:Taste:Finish:Balance:
19
21
20
21
Distillery: Glengyle Region: Campbeltown ABV: 46%
Did you know?
The original Glengyle distillery was established in 1872 and closed down in 1925. Over 75 years later, the distillery was re-opened in 2004. That’s why they call themselves the newest old distillery in Campbeltown.
Go to top