The Wheat Is Out There review

Photo by The Whisky Exchange

Lagavulin 12 year old single malt is a yearly special release by one of my favorite distilleries in the world, the Lagavulin distillery from Islay. I just absolutely love their 16 year old peated single malt from the core range. Well, I guess you can say that this 12YO is part of their core range as well. After all, it is being released annually, even though it has a special release statement. Lagavulin 12YO is also a peated single malt, aged in refill American Oak. It is quite affordable when thinking about special releases, yet it has a bigger price tag, than the mighty Lagavulin 16YO. Then again, it is cask strength, which always adds up to the price.

Lots of ifs and buts with this special release by Lagavulin. I don’t mind though, I just love the distillery so much because of their flagship whisky – the 16 year old. I surely was keen on trying out these younger, non-sherried versions side by side.

The 2015 edition is the 13th release in the Lagavulin 12 year old single malt series. Harsh, yet sweet and dry. Much rougher than their 16YO peated single malt, but offering similar kind of phenolic dryness and almost as much sweet spots as the flagship 16YO whisky.

Matured in:
Ex-Bourbon casks
Colour: Chardonnay
Nose: Peaty bonfire, meaty leather with emphasis on the meat. The meat has cinnamon, or is it cardamom. Medicinal and wee crispy citrus notes developing into strong floral aromas, like fresh cut hay and flowery meadow.
Taste: Rough smoke with strong peppery notes – pure bonfire and burning coal. Sweet malt and bit of eucalyptus – light berry notes in the taste too. Some fruity feel is present as well, in the form of stingy citrus.
Finish: Dry and peppery with ashes, smoke and phenols. Hints of bitter and crispy fruits, like lemon for example. The ashes almost literally rise back to your throat in the aftertaste. I love it.
Balance: Strong character, powerful and quite rich. I prefer this Lagavulin 12yo 2015 edition much more than the 2014 version. Well, I think I do. Then again, the much more smoother 2014 version is tasty too.

Photo by The Whisky Exchange

The 2014 edition of Lagavulin 12 year old features malts distilled in 2001 and 2002. Like stated before, the malts were matured in refill American oak casks and bottled at cask strength. Unlike the 16 year old Lagavulin, there is no sherry cask involvement. This version is a rough one when compared to its 4 years older sibling, but it’s much smoother than the 2015 edition. A good mix of rough peat and smoke, combined in a sophisticated palate.

Matured in:
Ex-Bourbon casks
Colour: Chardonnay
Nose: Leather and peat dominate, old leather jacket is the main aroma at the start. Some bonfire smoke is present too, especially at the start. Hints of floral notes and seaweed. Green fruits in a crispy way, like raw pears and green apples. Leather comes back dominating.
Taste: A bit more mellow than the 2015 edition. Yes, there is that ashy coal and bonfire smoke present but when tasting side by side, this 2014 cask strength Lagavulin 12YO is more delicate than the 2015 version. Hints of vanilla and lots of lemon. Fresh, phenolic and fruity.
Finish: Vanilla and citrus, along with delicate smoke. Smooth and long peppery finish. Velvety oil feels great. Dry but nowhere near the dryness of the 2015 version.
Balance: Sophisticated, yet strong smoky character. This dram would definitely not be as sophisticated, if I had tasted it alone and not side by side with the 2015 version. After a small consideration, I think I like this one more!?

Did you know?
Lagavulin used to peat its malt somewhere around 50 ppm level, but nowadays they make their malt with 35 ppm level. The transition happened in the mid 1990’s, so over the last 7 years or so, the casks with lower peat level malt have reached 16 years old. So if you have a chance to compare a Lagavulin 16YO purchased today with a similar product from 7 or 8 years ago, you’ll probably notice the difference. 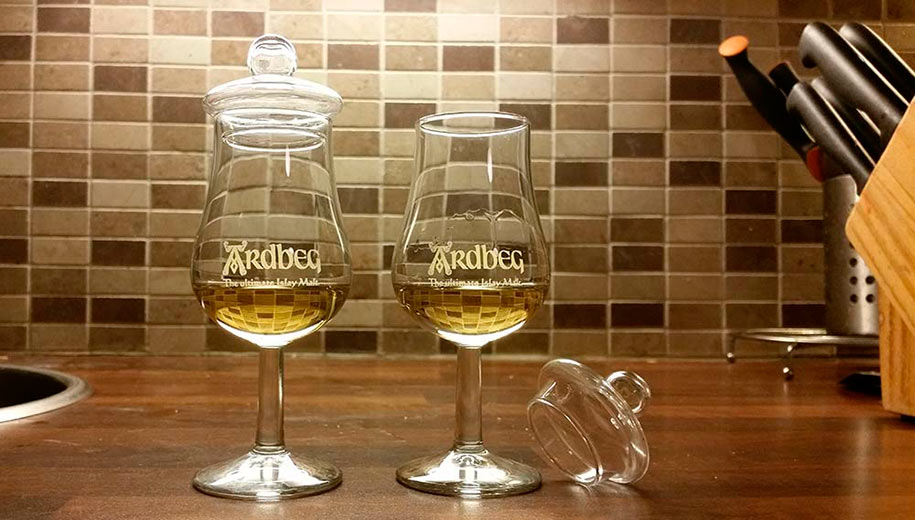