Whisky glasses – which type of glass are you looking for?

It’s been a while since I tasted a sample of this single malt whisky made for Laphroaig Fèis Ile 2013. So this is an old review but I figured out I had to get it online like all of my whisky reviews. Laphroaig Cairdeas Port Wood Finish is a limited and strange edition of Laphroaig released for the Islay whisky festival called Fèis Ìle in 2013. It has been matured in Ex-Bourbon casks, finished in Ex-Port casks. 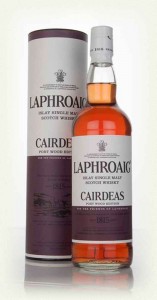 This Laphroaig is truly an odd fellow from the famous Islay distilery. A bit exciting, but a bit too weird, at least for my taste. Yet an adventurous dram, a whisky worth tasting, that’s for sure. Even though I say it’s mediocre in Laphroaig’s scale. This single malt has an amazing pink hue – and Cairdeas, pronounced more-or-less “car-chase”, means “friendship” in Gaelic.

THE ODD COUPLE with smoke and pink

Laphroaig Cairdeas Port Wood Finish is like the movie The Odd Couple, literally. The pinkish hue along with a jammy taste combined with the usual Laphroaig kinda smoke. I guess Cairdeas might as well mean “odd friendship” in Gaelic from now on.

I still suggest everyone to try it themselves. Go on, be the judge, don’t just take my word for it (of course that’s really the case with every whisky). Laphroaig Cairdeas 2013, the Port Finish edition is adventurous, a bold whisky. I’m sure someone out there will appreciate it more than I do – and it’s bold moves like these, that deserve attention. That’s how the whisky industry will go forward. And that was not a statement on NAS but experimenting with wood.

Matured in:
Ex-Bourbon casks, finished in Ex-Port casks
Colour: Pale gold
Nose: Dark fruits along with small hints of that signature smoke of Laphroaig. Raspberry jam with blood oranges clashing together very weirdly with the smoke rising on the background.
Taste: Sour citrus fruit notes and small amounts of vanilla. Dark, red marmalade jam and sweet peat going nicely together. Weird mix, but definitely the best part of this whisky.
Finish: Delicate smoke with peppery notes take over. The dry citrus notes along with some red fruits are present in the aftertaste as well.
Balance: Surely an exciting and adventurous whisky – with characteristic nose. Just a bit too one-sided. A showcase of the experimental craftsmanship of Laphroaig.

Ralfy has reviewed the 2012 version of Laphroaig Cairdeas: