Old Pulteney 12 year old single malt whisky comes from the town of Wick – Pulteney distillery is the most northerly distillery on Scottish mainland. Being next to the sea, Wick used to have herring fishing industry, but it isn’t the case anymore. They claim that Old Pulteney has absorbed the sea air in the flavor. The palate does feel like a salty breeze.

Matured in Ex-Bourbon casks, this dram has won Double Gold at the 2006 San Francisco World Spirits Competition. Even though for me, it felt quite mediocre. In its price range, it is a fair choice from the liquor store shelf. 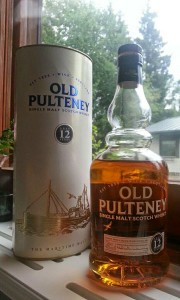 Felt like a THE HOBBIT running through seasides and forests

Old Pulteney 12YO felt funny, because it’s like a mix of two different styles. A combination of salty sea air kind of minerals with floral notes and forest berries. Earthy dram from seaside. So even though the taste and scents didn’t blow my mind, I did go for an adventure in “whisky seasides and forests”.

I was like a hobbit skipping away in the Shire (homeland of the Hobbits) or swimming through the northwestern Eriador shoresides.

Matured in:
Ex-Bourbon casks
Colour: Young Sauternes
Nose: Some bitterness with oak and berries. Floral notes as well. Like taking a whiff at junipers and lingonberries.
Taste: Oak with salty minerals are very strong in this one. Small amounts of toffee and spicy notes.
Finish: Spices with oak. Dry and medium length. Earthy.
Balance: A steady whisky, nothing great but not too bad either. Works coherently though every step of the tasting, just not the best one for my palate. In my opinion, not a big character – okay dram.

79
Nose:Taste:Finish:Balance:
20
20
19
20
Distillery: Old Pulteney Region: Highland ABV: 40% Non-chill filtered, no added colour
Did you know?
Old Pulteney bottle shape with the bulbous neck is a reflection of their unique stills. They don’t have the traditional “swan neck” because then they would have been too tall for the original still house.

Ralfy (who I usually agree with) liked it as well, so probably you’ll have to take his and San Francisco World Spirits Competition’s word for it!