Redbreast is an Irish whiskey brand coming from New Midleton distillery in Cork, Republic of Ireland (along with Green Spot and many other famous brands). Made with traditional Irish way, it is a Single Pot Still (also known as Pure Pot Still) whiskey. Made from malted and unmalted “green” barley in a pot still. Redbreast is the only Single Pot Still whiskey with an age statement.

Matured in a combination of first-fill Ex-Oloroso Sherry casks and Ex-Bourbon whisky barrels, majority in the Spanish Oloroso casks. 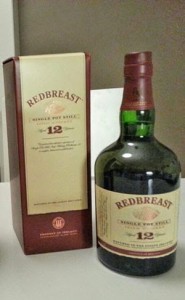 Shows lots of THE COMMITMENTS in the taste

When I think of Irish films and Redbreast 12YO, one movie comes into my mind: The Commitments. I think that Redbreast 12 year old whiskey is a dram made with much commitment.

Commitment shows in the taste and in the way it is produced from malted barley and unmalted “green” barley in a pot still. A unique dram with rich and fruity expression with warming spices. The only weak point, if I even may call it one, is the finish. Not bad at all, but too quick. I’d like it to linger much longer, that’s how good the aftertaste is.

The long and warming nose and taste are so magnificent, that a long finish would’ve been a superb continuum. Well, never mind the fast finish, this is a great dram. Good for holidays, definitely for the Christmas table.

Not a Bloody Sunday whiskey – a nice Sunday dram. Wow, I just made another Irish movie reference!

You can also enjoy cask strength version of Redbreast 12 year old whiskey. Check out my review if heavy ABV interests you.

Matured in:
First-fill Ex-Oloroso Sherry casks and Ex-Bourbon whisky barrels
Colour: Pale amber
Nose: Very warming with sweet and fruity tones. Apples dominate very much. Vanilla and ginger go nicely along.
Taste: Creamy and syrupy body with much warmth growing in gentle way. The warming spices like cinnamon and pepper do not attack but they dominate gently. Vanilla on the mix as well.
Finish: Too bad it didn’t last longer. A bigger finish would’ve made it a 90 point whiskey for me. Great combo of warming spices and fruits.
Balance: Unique in taste and very versatile all the way. Though I don’t have much experience about ’em, I’m still starting to believe the statements claiming this as best Irish whiskey. Creamy and easy to drink. Jim Murray’s choice as “Irish Whiskey of the year” with 96 points in his 2010 Whisky Bible. And in the same year it was “Best 12 Year Old Irish Whiskey” in the World Whiskies Awards. Check out all the awards it has won.