Had a great Irish INTERMISSION with this dram

Enjoyed in an intermission of a Team Finland’s important hockey game, this was like the Irish movie Intermission – humorously dark and good. Like this dram’s eccentric nose. Bushmills 16YO Single Malt Irish Whiskey is a wee light on the taste but it still is a nice dram with complexity.

Like most Irish whiskeys, Bushmills 16 yrs is distilled three times. It is also aged in three different kinds of wood barrels. First in American bourbon casks, after that in Oloroso sherry casks and lastly, finished in port wine pipes.

Full with rich and smooth character and warming spices, I could imagine this on my Christmas table. Just like Redbreast 12YO, another great Irish dram. 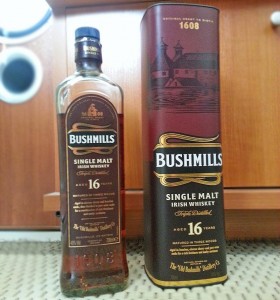