Like the name states, Bowmore Tempest VI 10 year old single malt is the 6th batch of the nowadays famous Tempest series by one of the oldest distilleries in Scotland. Bowmore was founded in 1779 and it is the oldest distillery in Islay region. Bowmore is one of only 6 distilleries who still produce malted barley in its own malting floors, where the barley is turned regularly by hand to control the temperature and rate of germination. 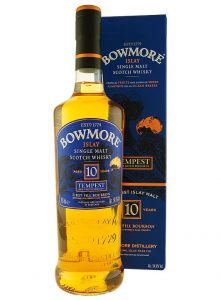 So far, they’ve released 6 small batches of Bowmore Tempest. All of them have been matured in first-fill Ex-Bourbon casks. Some of them are peatier than others, I think. I have only experienced this 6th batch but apparently, they’ve all been good. Bowmore Tempest 10YO is an annual release presented at cask strength and since fans of peated whisky have really noticed this series, Tempests are usually sold out fast.

Bowmore states that their:

“Master Blender has selected a range of casks that create a tropical storm for the sixth series. One moment your face is washed by the full force of a typhoon, with its salty sea tang. Then next you feel the warmth of the sun’s golden rays on your skin as the clouds disperse and a magical calm descends. Welcome to Islay, where the seasons, moods and flavours all collide.”

Nicely put, I must add.

Another Tropical Thunder – this time literally

Bowmore Tempest Batch No. 6 has 54,9% alcohol per volume level and it is peaty. But it is mellow peat. This is not a feisty one, though it is nicely peppery. Reminds me of Kavalan Solist Ex-Bourbon, which is absolutely brilliant. I’ve referenced the movie Tropical Thunder before, with English Whisky Chapter 9 by English Whisky Co. This time the movie in question is even more suitable. So I have to make claim this as Tropic Thunder – tropical fruits in a feisty package. Like the movie, offering fun stuff in the middle of explosions, very well produced.

Matured in:
firs-fill Ex-Bourbon casks
Colour: Gold
Nose: Starts with peat and pepper. Salty air breeze in a mellow way. Salty, toasted banana and barley. Like someone had put out a bonfire using fresh lemon juice.
Taste: Peat is present but fades away quite fast. Buttery with coconut and barley. Bananas taken from the oven.
Finish: Mix of peppers and tropical fruits. The peppery side takes over much more, Fisherman’s Friend is written all over the aftertaste. Bit oily, with a bitter touch. Salty tangerine rises in the aftertaste.
Balance: Quite thick body with a lighter taste, yet strong Islay characteristics in the mix. Very versatile dram – unusual combo. Bowmore has produced their own feisty Kavalan!