Bushmills Black Bush is one those “bang for the buck” blended whiskeys. Coming from The Old Bushmills Distillery in Northern Ireland, it is a malt and grain whiskey blend. For a single malt lover this is worth a try, because it has 80% of triple-distilled single malt whiskey. Aged for 7 years in Spanish Oloroso sherry casks and also in Ex-Bourbon barrels before the marriage with sweet grain whiskey. 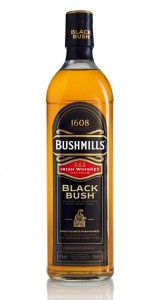 THE WIND THAT SHAKES THE BARLEY

Bushmills Black Bush is surely a treat when I compare it other average blended whiskies. As a fan of malt I really like the strong barley notes in this one. Like the title implies, something had shook this blend of malt and grain in a good way. Either a wind that shook the barley or maybe the fact, that it had been matured for quite a long time for a blend. Probably both…

Matured in:
Ex-Sherry Oloroso casks and Ex-Bourbon barrels
Colour: Pale gold
Nose: Barley hits with force with sweet and floral notes on the back.
Taste: Thick body with hints of fruits. And barley dominates the palate as well.
Finish: Again, barley notes are strong, covered with some sweetness. Finish is the first time, I noticed the usual bad habits of blended dram: poignant and watery, but fortunately just a little bit.
Balance: One-sided but nice. Malt dominates in a fresh way. Without the fast finish with some “usual blended” aftertaste, Black Bush would have had a better score. Definitely one of my favorite malt and grain blends!