Compass Box Enlightenment was made in the spirit of Compass Box’s Campaign for Scotch Whisky Transparency. You can read the backstory of this campaign from my Spice Tree review – long story short, production of Spice Tree had to be stopped because of Scotch Whisky Association’s ridiculous regulations (Fortunately they have relaunched Spice Tree since then). Compass Box used inner staves in their barrels, which was against tradition according to SWA. What’s even more ridiculous, SWA has threatened Compass Box before: because they gave away too much information about their whisky(!?). Sounds ludicrous to me – you can’t be too specific about the contents of your product. Starting from November 2016, Compass Box is allowed to tell the consumer specifically about their products, if consumers ask about them. 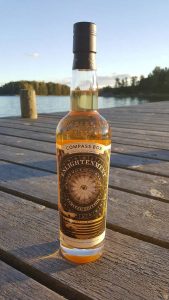 Compass Box Enlightenment is a blended malt made of two Highland (59%) and two Speyside (41%) whiskies:

Enlightenment comes from The Insider of whisky business

Compass Box Enlightenment is fresh and vibrant and it needs a lot of time to open up. Let it rest in the glass quite a while and you’ll get more out of it. Too bad I had this in our local whisky society’s Compass Box tasting. Whole bottle of this whisky resting in the cabinet, getting some oxidation, would probably suit best. Well, tastings are what they are, you have to form an opinion in the moment, and my opinion is: Compass Box Enlightenment is surely not one of their best whiskies but it’s still good. Compass Box is probably not capable of bottling mediocre or bad whisky.

Clynelish surely brings the wax and apples to this palate and Balblair adds up some perfume. Glentauchers is apparently responsible for the herbal and fruity side of Enlightenment. What was surprising to read from the marketing texts, Mortlach should be bringing muscular weighty tones. Even though the distillery is very much profiled as the producer of smooth and tender whiskies.

Since launching the Compass Box Whisky Co., I have always been a firm believer in the spirit of enlightenment – that the more information we can share with our customers about the Scotch hisky we produce, the better. Alas, it transpires such beliefs fall foul of current EU and UK regulations, which prevent us from sharing information about the age of every component whisky used in the creation of our blends. This whisky, Enlightenment, is our response to these regulations. Inspired by the writers, philosophers and scientists of the Age of Enlightenment it sets out to encourage the industry to consider the absurdity of a system that prevents producers from telling consumers exactly what has gone into the whiskies they are drinking.

I can’t think of any other movie than The Insider. Michael Clayton is another good film about being transparent when doing business. Except in those movies, the firms are trying to hide things, while Compass Box is trying to tell everything. SWA is like the bad company trying to keep the business as secret as it can be, while John Glaser is fighting for consumer’s rights. The reference is provocative I know, I’m just mad about the ludicrous regulations.

Matured in:
First fill and refill Ex-Bourbon casks
Colour: Sunlight
Nose: Cinnamon and apples, very summery dram. Nicely fragrant. Stingy, yet delicate – mild vanilla notes and delicate barley nicely keeping it fresh. Gets smooth and more delicate over time and water.
Taste: Very fruity right at the start. Bitter and waxy, almost as bitter as Spice Tree but more waxy. Addition of water makes it even more bitter. Also the fruity notes are highlighted more with few drops of water. And nice taste of rhubarb starts to dominate.
Finish: Bitter wax in the aftertaste as well. Water and oxidation make the rather quick finish much smoother.
Balance: Not in perfect balance but still a nice whisky. I could imagine sipping this blended malt especially in summertime.

We had a nice Compass Box tasting with our local whisky community. The level of the tasting was set high in every way.