Deanston Virgin Oak is a Highland single malt whisky from Deanston distillery, which has been certified by the Organic Food Association. So you can always feel good about yourself, while trying their Scotch. They are the largest distillery owned by Burn Stewart Distillers Ltd, who also own Bunnahabhain and Tobermory distilleries.

On the banks of the River Teith, Deanston started out as a cotton mill in 1785. The mill was closed in 1965, which made way for whisky making. The distillery has two pairs of large stills with oversized balls to encourage reflux – making the spirit lighter. 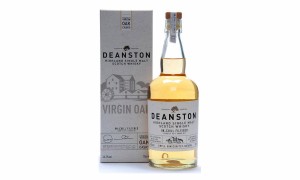 This is very young whisky. Like the name says, matured in New Oak casks from Kentucky. The young age doesn’t show all the time but when it shows, it’s in a good way. Offering very much simplicity, but doing it nicely.

Deanston Virgin Oak is simple in a good way. Like stated before, the young age shows in a good way – this is a very fresh whisky.
I admit, I was skeptic about it. In theory, new oak and young whisky isn’t for me. But Deanston proved me wrong. Fearing that the palate is too sharp and fruity stingy for me, it turned out to be fresh and in balance.

Young but not (too) stingy, fresh in every step, even in the one-sided and sort finish. Cool and crispy in a sophisticated way at the start – with strong notes of barley in the nose as well. Deanston Virgin Oak is like Lolita the movie. The version made in 1997, directed by Adrian Lyne. Jeremy Irons having a whisky tone in his voice is not the only factor. I think that the new version is just as good as the original adaptation of Nabokov’s book by Stanley Kubrick.

The movie and the whisky both demonstrate that a young version can be good. I know it sounds bad but I’m only talking about the film, not the concept of Lolita, which is disturbing of course.

Matured in:
New Oak casks
Colour: Sunlight
Nose: Tender, yet fresh start with fruity citrus fruit notes. Barley starts dominating nicely after that. Hints of honey are in the mix as well. Simple but very good start.
Taste: Sweet with creamy toffee, which is also very fresh, some vanilla is in there too. Tingling with oak, giving a very dry taste at the back of your throat.
Finish: Bit sweet and mild spices, both are short expressions. Only the dry oak continues to linger in the aftertaste, but even that doesn’t take long.
Balance: Light spirit helps this young whisky matured in new oak. Straight forward, yet sophisticated and fresh dram in good balance.