Blend your own whiskies

Four Roses Small Batch 2014 is a 9 year old bourbon, containing also bourbons up to 11, 12 and 13 years old. This is a cask strength limited edition by the Four Roses distillery from Lawrenceburg, Kentucky. Every year they release a small batch of this heavier alcohol per volume (55,9%) stuff. The normal Four Roses Small Batch has 45% ABV. 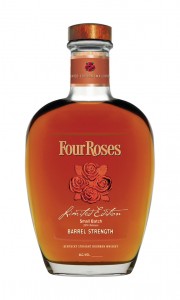 This bourbon starts to get better and better towards the end. Probably the rye starts to show its best parts for a rye lover like me. I couldn’t come up with a better movie reference, so I’ll use just a fitting title I found from Internet Movie Database. Because after the sweetness, there comes The Bitter End, which feels nice. And suits very well for this small batch bourbon.

Mash bill:
Mix of 60% corn, 35% rye and 5% malted barley (majority) and 75% corn, 20% rye and 5% malted barley (minority)
Colour: Dark amber
Nose: Sharp but sweet. Corn dominates. Dark sugar and even a brief breeze of smoke or was I dreaming? The corn has that honey feel but mostly it’s just corn. I think that the rye makes the heavy sharpness.
Taste: Sweet caramel and dark sugar with nice maple syrup. Very full. Sweet vanilla starts to dominate. Spices fight with the sweet spots nicely in harmony.
Finish: On the bitter side with dry peppery notes. I think it’s the rye influence. Hints of mint with oak. Surprisingly fast for a cask strength, still, good length.
Balance: Good, balanced and amazingly smooth for a cask strength. Good bourbon!