Glenburgie is also known as Glenburgie-Glenlivet, Glen Burgie or Glenburry. The distillery is located near Alves, Moray in Speyside region. Their whisky is mostly used for blends. Ballantine’s and Old Smuggler are famous blends with Glenburgie malt whisky in them.

When the distillery was acquired in 1935 by Hiram Walker, it became an essential component of Ballantine’s blended whisky. Official Glenburgie single malt whisky bottlings are quite rare because of this.

Gordon & MacPhail is a family-owned independent bottler, it was founded in 1895 by James Gordon and John Alexander MacPhail. Among the company’s first employees was a 15 year old apprentice John Urquhart, who helped James Gordon select and buy whisky casks. After MacPhail’s retirement and Gordon’s sudden death in 1915, Urquhart became the senior partner. Today the family owned company has fourth generation of Urquharts directing the business.

This 10 year old Glenburgie single malt by Gordon and MacPhail has been matured in refill sherry hogsheads and first fill sherry butts. It has natural colour and it has been chill-filtered.

Glengarry Glen Ross – couldn’t come up with a better reference

My movie reference is quite loose. This Glenburgie needs time (in the glass) to understand, like Glengarry Glen Ross which is a greatly written, yet a slowly progressing play made for silver screen. Both have lots of Glens in them as well (indicating to Glenburgie distillerys many names).

If I were a good salesman like Ricky Roma played by Al Pacino in the movie, I’d probably rate this whisky very high. Because it’s a rare breed coming from distillery focusing on blends. But then again, I have to be true to myself: so overall this is a nice decent whisky, which deserves nice decent scoring. Easy to drink and okay when you take time to experience and study it. But it won’t blow your mind. Kinda like the movie made about sales people, based on a theater play…

Matured in:
Refill Ex-Sherry hogsheads and first fill Ex-Sherry butts
ABV: 40%
Colour: Pale gold
Nose: Very subtle aromas. Starts with floral notes but quite quickly sherry influence shows up, giving sherried sultanas and dried fruits. Tannic oak notes are strong.
Taste: First, the palate is very floral and lightly earthy. Sherry starts to take over, bringing red fruits and berries. Drops of water add wee spices and sulphury notes.
Finish: Nicely herbal and spicy with touch of sherry and fruits. Bit grassy. Delicate, fruity and earthy, medium length.
Balance: Quite sophisticated, some earthy notes step up from time to time. And of course the smooth sherry influence is evident, especially if you let it rest in the glass. Gets better the more you give some time and thought to this Glenburgie.

Glenburgie 10YO Gordon and MacPhail Scoring 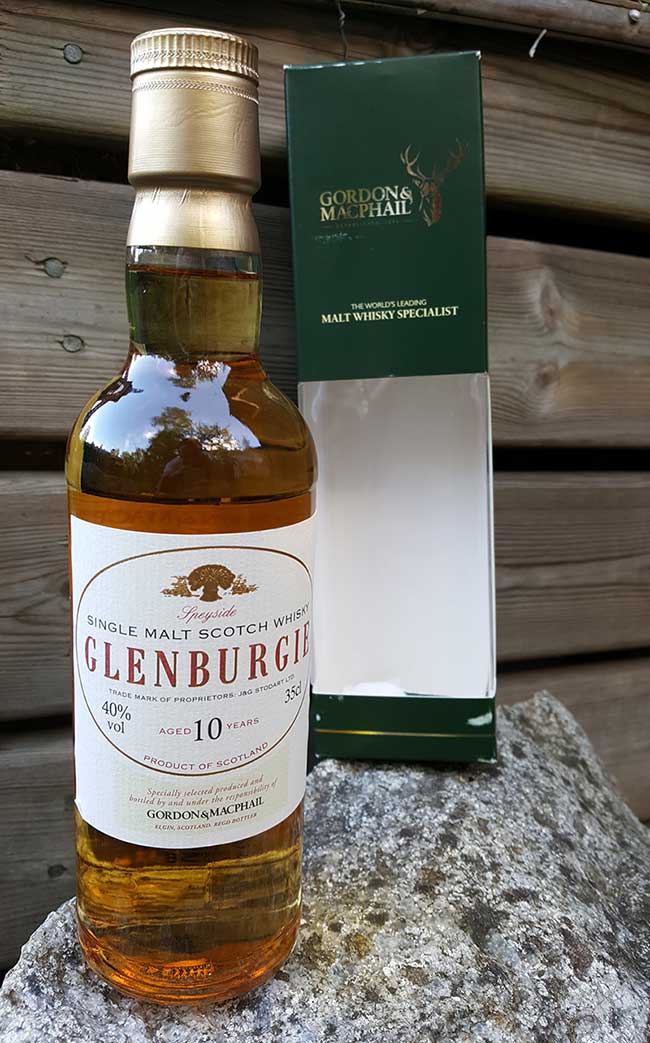