The whiskey has been made out of a single grain, which in this case means Irish corn whiskey sourced from Cooley distillery. Double Barrel means it’s been aged in two different types of casks. First in American Ex-Bourbon barrels before finished for six months in Spanish Ex-Oloroso Sherry casks.

Based on the information from Glendalough website, they seem to believe in double maturing:

They also have a triple matured whiskey in their selection.

Whiskey from the wild

Glendalough means Glen of two Lakes. It is located just an hours drive south of Dublin, near Wicklow Mountains in a beautiful valley. St Kevin of Glendalough is the man in the distillery logo. And the story of St Kevin is where these whiskey makers draw their inspiration.

In this whiskey they’ve captured the story of the man who disappeared into the mountains and became one with the wild. The whiskey has earthy notes and fresh crispy berries. So it’s easy to be one with the wild like St Kevin, pondering your place in this world while sipping away this dram.

Matured in:
Ex-Bourbon barrels, finished in Ex-Oloroso Sherry casks for six months
ABV: 42%
Non-chill filtered, no added colour
Colour: Hazy amber
Nose: Strong dominant juniper notes hit you freshly from the start. Grapefruit and unripe green apples. Quite earthy.
Taste: Mellow, yet bit crispy. The juniper notes are still strong, but much sweeter. Like drinking watery gin in mixed in a Collins drink. Syrup, lime and sugary juniper notes.
Finish: Smooth and sweet with red berries and oak. And yes, juniper is in the finish as well, late in the medium length aftertaste.
Balance: Very fresh whisky. Enjoyable and vibrant, surprisingly good. Quite one-sided but fresh, and easy to drink. 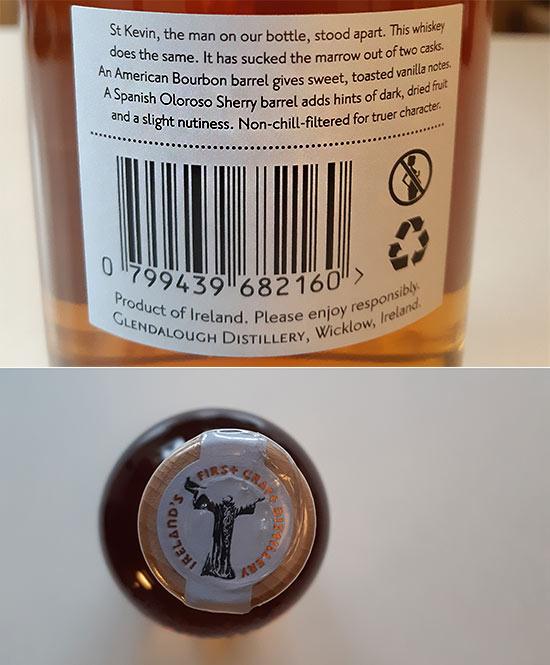