Review updated 9/23/2017
Tasted this sherry monster again and had a chance to really revisit it. It’s been a while since I first tasted Glenfarclas 105 and I’ve learned to drink cask strength versions since then. 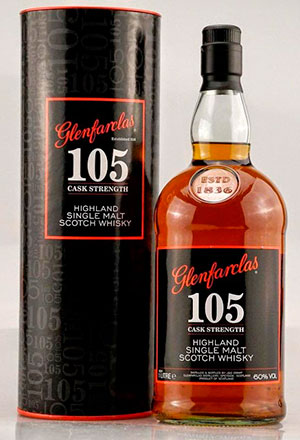 Glenfarclas was the first distillery to release a cask strength single malt whisky in 1968. That CS bottling has since been renamed to 105, which is the British alcohol proof equivalent for 60% ABV (alcohol by volume). Nowadays 60% ABV is referred as 120 proof. That is simply double the alcohol by volume, as opposed to 105 degrees proof or 7/4th times the ABV.

Malt Maniacs stated this as the best “Bang for your buck” whisky in 2004. Glenfarclas 105 has been matured in a mix of Ex-Bourbon casks and Spanish oak cask, which have previously held Oloroso or Fino Sherry. It has no age statement but Glenfarclas website mentions that all of their whiskies are aged at least 8 years.

As mentioned Glenfarclas 105 is cask strength with a very high ABV level. That’s why I added too much water in it, while tasting this dram few years ago. Watered down sherry bomb was not my cup of tea then. Now, when revisiting this sherry monster, it’s still a Bottle Shock in many ways.

It gives you that strong sherry attack, but turns quite smooth over time and addition of water. Glenfarclas 105 is like a sherry superhero without water, explosive. After the addition of water it gets calm but offers lots of strong sherried flavors. Even though I prefer thicker versions of sherried whiskies, I can see why this whisky certainly is “bang for buck” dram.

Matured in
Ex-Bourbon and Ex-Sherry casks
ABV: 60%
Colour: Amber gold
Nose: Strong sherry with big oak influence. Apples on the background. Crispy and fresh splash of oranges and acid sherry.
Taste: Sherry is big and acid! Crispy citrus. Oak starts dominating when you give it a rest and add water. Quite thick but not as thick as A’Bunadhs or the usual Glenfarclas sherry bombs. Which is why I prefer those more. Wee spicy with fruits and raisins.
Finish: Add water, let the dram open up for 15 minutes or longer. The finish gets nicely smooth. Bitter sherry dominates. Red fruits and berries and citrus notes. Turns quite spicy over time and addition of water.
Balance: Decent whisky, probably great for sherry whisky drinkers. Taste and finish are the best parts. One-sided but with big character. Bang for buck sherry bomb.