Glenmorangie 10 year old, aka The Original single malt whisky comes from far north from the Highland region in Scotland. Glenmorangie distillery is known for the tallest stills in Scotland, where only the lightest and purist spirit vapours reach the top. That gives Glenmorangie its signatory floral and fruity character. 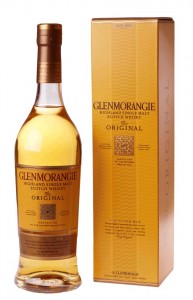 Glenmorangie’s products tend to be very sweet also, Nectar D’Òr is a great example. Glenmorangie The Original is a core bottling in their range and it did replace the old 10 year old single malt. Matured in Ex-Bourbon casks, apparently packaging is the only change made, when comparing to the old version.

Many people will disagree, but in my opinion, Glenmorangie 10yo Original is a pretty straight shooting whisky. I didn’t find that much complexity in it, because it felt so light. Like Lemonade Joe in the movie, it’s straight forward, yet a bit incoherent. I’m gonna call it “the lemonade whisky” from no on, suitable for light socializing, for summer afternoon or evening get-together.

If you have done your homework, you won’t be taking my word for it only. Many people find this dram very enjoyable. It’s been praised by Jim Murray and lots of other whisky connoisseurs, it has won lots of prizes too (including a Double Gold at the San Francisco World Spirits Competition in 2010). Whisky Advocate’s John Hansell gave it a score of 93 points, and even though I disagree with the scoring, I agree on one thing with him:

“…but I can only imagine what it would taste like at 46% and unchill-filtered like the wood finish expressions.”

Matured in:
Ex-Bourbon casks
Colour: Sunlight
Nose: Very mellow aromas, like a fruity fragrance. Watery lemonade is the main feeling. Citrus fruits and floral notes.
Taste: Floral notes are massive, dominating the taste all the way. Caramel sweetness and some stingy lemony feel are present. Bit creamy as well.
Finish: Spices with mint in the mix. Light, yet a bit sharp and fruity aftertaste.
Balance: Very light start and rough end, but with a nice taste in the middle. A bit of scramble of light and stingy notes, yet a decent whisky.

Ralfy liked Glenmorangie Original very much, scoring 87 points for it: