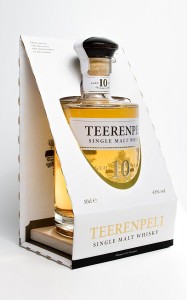 Official photo of the 10yo by Teerenpeli

Finnish whisky producer Teerenpeli released the first Finnish 10 year old single malt in 10/10/2015. Well, actually they did offer a cask strength version of a 10 year old whisky in 2014, but this newest version is going to be released for retail also. The cask strength version (ABV: 58,5%) was served in Teerenpeli restaurants 5th of February in 2014, straight from 16 liter oak casks marinated with PX sherry. Before that, the whisky had been matured in Ex-Bourbon casks. Part of Finnish whisky history, so it’s a shame I didn’t get a chance to try it.

The official 10 year old bottling by Teerenpeli, for retail markets, has been matured in a combination of bourbon and sherry casks. It was first launched in Whisky Show London on 3rd of October 2015, accompanied by whisky writer Ian Buxton. As I mentioned before, the Finnish premiere was in 10th of October. The whisky will be available in Finnish retail market (state owned liquor stores called Alko) in November 2015. For wider audience: it will be available in The Whisky Exchange in near future. 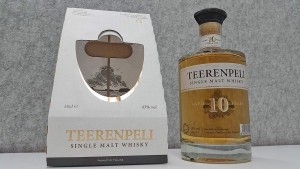 Got my own bottle just before Christmas

I only tried a 1 cl sample, so this is a quick review of Teerenpeli 10 year old. I will edit my review as soon as I try it again – and I will. This has surely been a meaningful journey for Finnish whisky enthusiasts and pioneers. When putting it into perspective, it feels like Boyhood – the movie. It has been a pleasure watching the progress of whisky in Finland, and especially the progress of Teerenpeli. Just like the movie Boyhood, the journey has been experimental and touching. Filled with pioneer attitude, love and commitment for the product in question.

“A huge step forward from the eight-year! All the pieces are falling into place.”

I definitely agree with Jarkko.

Edit
Finally, in December 2015 I bought a whole bottle of Teerenpeli 10yo. So I updated the tasting notes based on the new experience of owning a whole bottle, how for example oxidation made an impact.
Matured in:
Ex-Bourbon and Ex-Sherry casks
Colour: Amber
Nose: Creamy toffee and hints of vanilla. Malt is strong. After revisiting this dram by buying a whole bottle: salty licorice combined with fruit candy grain. Like the salmiac version of the candy in question. With time, develops into smooth creamy toffee, with notes of vanilla.
Taste: Peppery and salty. Licorice, oak and spices. Some sweet, sugary notes buried in the back as well. With oxidation, this dram has developed an fruit candy feel. Notes of that same candy which was in the nose. The salmiac is very much present again, reminds my very much of the Highland Park 18yo.
Finish: Spicy with oak. A bit oily and a bit too quick, still medium length but I would have preferred it to go on and on. I have to get some more to make a better judgement. After buying the whole bottle: oak with hints of spices and wee bitter notes. Some salmiac is present again, the taste and aftertaste resemble very much HP18 – both drams get even a lot better while resting in the bottle.
Balance: A big step up from the 3 and 8 year old single malts. Has the same kind of notes than those two, but all the aromas and taste are deeper. After buying the whole bottle and trying this dram with time (and oxidation), made the score a bit better 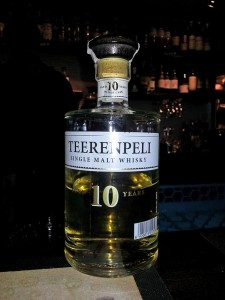 Had a dram of the 10yo at Teerenpeli restaurant in Turku, Finland. 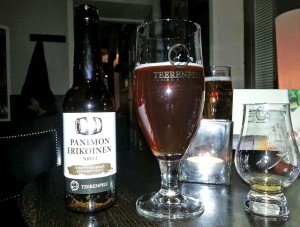 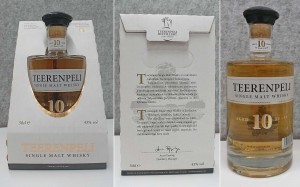 After that I had to get my own bottle