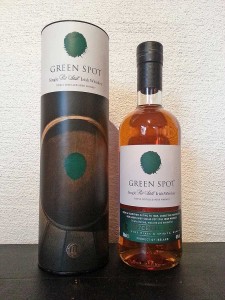 Matured in a combination of first fill and refill Ex-Bourbon casks and 25% in Ex-Sherry casks. There’s also a whiskey called Yellow Spot, which is 12 year old whiskey matured in Ex-Bourbon barrels, Ex-Sherry butts and Ex-Malaga casks. Small quantities are produced, probably because of small demand.

Little bit about the history. Mitchell & Son wine merchants were established in 1805 and at some point, started selling whiskey with help from Jameson’s Bow Street Distillery. The vatting was originally called “Pat whiskey” and sold as a 10 year old. The name was replaced because of their practice of marking casks of different ages with a spot of colored paint. So there used to be a Blue Spot, Red Spot, Yellow Spot and Green Spot – last two still remaining today.

Green Spot is in general, a highly regarded dram amongst whisky enthusiasts and writers. Somehow it didn’t rock my boat so much – all in all, an okay dram in my book. This time my movie reference is a TV movie. In a way, Green Spot is like a good TV movie, it has it’s moments of glory, but at times, it can be a bit dull. Full of green fruits, it was like being in a House on Greenapple Road, while tasting this Irish whiskey.

Matured in:
First fill and refill Ex-Bourbon casks and Ex-Sherry casks
Colour: Pale gold
Nose: Green apples and small hints of sherry. Like apricot perfume, very delicate aromas. Hints of sugared barley.
Taste: Green fruits, apples and raw pears. Bit rubbery as well. Water adds some nice toffee.
Finish: Bitter and spicy, hints of oak and some vanilla. Quick finish.
Balance: The nose promises a lot more than the taste gives. Not bad at all but bit too delicate and one-sided. Tasting is based on one sample, though.

Green Spot – The Living Relic of the Days of the Whiskey Bonders, a documentary by Peter Mulryan: