Hyde 10 year old No. 1 Presidents Cask is a single malt Irish whiskey by Hibernia Distillers – who are planning to make their own whiskey in five years or so, but until then – are sourcing their products from up and running distilleries. A familiar business model by other new Irish whiskey companies, like Teeling or Walsh Whiskey. This limited edition of 5000 bottles takes its name from the first President of Ireland (1938-45), Douglas Hyde. The malt whiskey is from Cooley distillery and it’s been matured in Kentucky Ex-Bourbon barrels before getting a six month finish in first fill Oloroso Sherry casks. Bottled without chill filtration and double distilled. 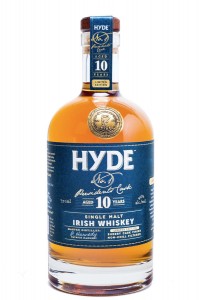 THE WIND THAT SHAKES THE BARLEY – again

I have to mention, I got a free sample of Hyde 10YO from Hibernia Distillers. Just to let you know, I want to be as sincere as I can about everything. Hopefully it didn’t have an affect on my tasting. And if it did in anyway, I’d guess that I dealt a free sample with more criticism. This was actually my first free sample of whisky.

I’ve used this film in a Irish whiskey review before, but I’m afraid, I have to do it again. A whiskey that gets its name after the first Irish President elected after the ratification of the first Irish Constitution and also a whiskey, which happens to have some nice barley notes in it, has to be referenced with The Wind That Shakes The Barley. A movie about Irish war for Independence. Following the War of Independence, after the foundation of the Irish Free State, Douglas Hyde (who also had a major influence in protecting the Irish language) was elected into Irish Parliament. Over ten years after that, he became the president.

Hyde 10YO single malt has history and pride in the name. And this Skibereen, West Cork based Irish whiskey company can be proud of their new product. Even though the malt comes from another distillery. Well sourced and matured Irish single malt whiskey.

Matured in:
Ex-Bourbon barrels, finished in Ex-Oloroso Sherry casks
Colour: Deep amber
Nose: Quite mellow, yet good. Smooth sherry notes with apricot and hints of licorice. Barley and oak are present as well. Promising start.
Taste: Malty and warm, hints of warming spices. Dry oak along with dried fruits and a bitter floral feel. Needs few drops of water and some air to get better. After that, the malt gets sweeter and nice fruit and sherry notes rise from the back. Like orange marmalade with wee smoke buried very, very deep.
Finish: Long and dry finish. Dryness goes away bit, when added water. Licorice and pepper, along with warming spices make a nice aftertaste. Sherry and oak are present as well.
Balance: Quite nice dram when you really get to know it. Arrange time (and water) for this whiskey. I found that the nose was actually better without water, but the taste got lot better with few drops. So my tip would be: first, lots of sniffing, then some water dripping. Enjoy it with patience.

85
Nose:Taste:Finish:Balance:
21
22
21
21
Distillery: Cooley Bottler: Hibernia Distillers ABV: 46% Non-chill filtered, no added colour
Did you know?
The name Hyde is very much associated with this single malt. Not only the last name of Ireland’s first president, it’s also the last name of many people behind this whiskey: brothers Conor and Alan Hyde along with their nephew Peter (as the sales manager). 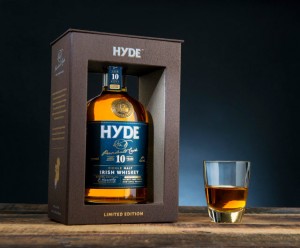