Hammer Head 1989 23 year old single malt whisky has a great backstory. Distilled just before the Czechoslovakian Velvet Revolution, every ingredient is local. Barley, water and even the oak casks were made out of Czech wood. Purchased by Stock Spirits Group, the whisky had been forgotten for 20 years in the cellar of Prádlo distillery at Plzen. A distillery, which was opened in 1928 and nationalized in 1980’s under the communist rule. A distillery, which was destined to make Scottish kind of high quality malt whisky, after years of making various pot distilled spirits. 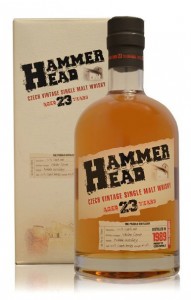 This is very limited stuff, sold for travel retail market. A Bohemian single malt, believed to be the only one of its kind in the world.

Like being in Hotel Lux, even though the movie in question is German and is set on 1938. In the movie, an apolitical comedian called Hans Zeisig flees from Nazi-Berlin to Russia and finds himself in the legendary Hotel Lux in Moscow. That’s where he meets Stalin, who by the way, was keen on making Russian whisky because Winston Churchill had given him fine Scottish whisky. That desire of Stalin wasn’t part of the movie, but it did bring Hammer Head to my mind – a whisky distilled under Communist rule.

You can almost feel the Cold War era in this Czech single malt. There’s freshness especially in the nose, but also some dusty proletarian kinda taste. I’m glad I got to taste this dram.

Matured in:
Czech oak casks
Colour: Golden amber
Nose: Reminds me of gin or hoppy Indian Pale Ale. Dry grape notes with hints of lime start the show, sour redcurrants are present as well. Like a mellow citrus fragrant, when given time in the glass. Drops of water brings oak and spices.
Taste: Light, yet spicy and crispy. Dry citrus and oak, hints of dark toffee. Drops of water bring the malt and adds lots of spices in the mix.
Finish: Aftertaste is great but there’s not that much of it. It’s a shame, could’ve enjoyed more of that dark roasted coffee and tobacco leaf notes. Little spicy as well.
Balance: This is a very cheery whisky. Unique, especially the nose, which had some similar notes as Old Buck made for VYS in Finland. With more alcohol per volume, it would verge 90 points. I prefer it without water.

84
Nose:Taste:Finish:Balance:
22
21
20
21
Distillery: Pradlo distillery Region: Plzen, Czech Republic Owner: Stock Spirits Group ABV: 40.7%
Did you know?
The name Hammer Head comes from the old grain mill, which produced the barley for this single malt whisky. The barley was milled by a hammer mill.

Here’s Ralfy with his review of Hammer Head 23YO 1989 single malt: