Even though I’m not a big fan of Johnnie Walker, this one caught my eye because of the rye statement on the label. Yes, I’m a big fan of rye whiskey! Johnnie Walker Blender’s Batch Red Rye Cask Finish is part of the brand’s experimental Blenders’s Batch range – trying to push the boundaries of whisky making. Which is always a good perspective or some marketing talk. Hats of to Johnnie Walker for keeping the price point reasonable with this blend. 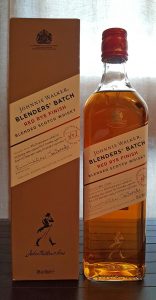 Johnnie Walker Red Rye Finish is the first release of Blenders’s Batch series. It is an innovative experiment of flavor. Apparently after 50 experiments of over 200 malt and grain whiskies, they’ve used small number of malt from Cardhu distillery and grain whiskies from Port Dundas. This blend has been matured in first fill Ex-Bourbon casks for at least 3 years – story doesn’t tell, how long. After maturation, the whisky has been finished for six months in old rye whiskey casks.

Rye finish doesn’t give that intensity, which I wanted (but wasn’t necessarily expecting). This is a nice try but at the end of the day, doesn’t give much exception to Johnnie Walker Red Label. Even though the flavor profiles are different, somehow I just get the feeling of Red Label with some small adjustments.

I know it’s dumb to think like that, because Dailuaine distillery offers the malt for Red Label and Cardhu is used in Johnnie Walker Blue Label. So Red Rye Finish and Red Label are completely different blended whisky recipes. And as mentioned, don’t share similar kind of flavors. I guess Johnnie Walker Red Rye Finish couldn’t offer enough rye character to make it stand out from their usual range.

So nice try, but Johnnie Walker has to “keep on running” with more experiments.

Matured in:
First fill Ex-Bourbon casks, finished 6 months in Ex-Rye casks
Colour: Golden amber
Nose: Starts with nutty wee smoke. Touch of rye is briefly present. Hints of lemon notes. Aromas are the worst part, giving away some pointy grain whisky roughness.
Taste: Couldn’t trace any rye notes. Spicy oak flavors. Honey dominates with wee citrus notes on the background. Quite tasty actually, when thinking about the price range…
Finish: Peppery and oaky. Ginger and honey. Quite fast with bit of grainy kick. But the kick is subtle.
Balance: I guess I wasn’t even expecting it, but lack of rye influence was disappointing. It would have been a positive upset to spot some big rye notes. This Johnnie Walker does have some character, though. So the rye oak has left its mark a bit.