This is the Game of Thrones edition from one of my favorite whisky distilleries, the Lagavulin distillery. A 9 year old single malt Lagavulin whisky named as the House Lannister.

Malt whisky aged below 10 years usually sounds like it’s going to be unmatured. But when it’s a single malt from Lagavulin distillery, it usually gets my hopes high.

Then again, branded as Game of Thrones whisky sounds like we are not getting the best casks. Because someone, in this case HBO and the makers of the TV series(?), are taking the profit. And of course Lagavulin and its owners Diageo want to get their share of the cash. So the cost of production probably comes unhealthy, meaning that Lagavulin can’t sell its best casks.

What was nice about this was the surprisingly high alcohol by volume level. 46% ABV sounds like it’s doing justice for Lagavulin’s heritage. Lagavulin 9 years old from the Game of Thrones Single Malts Collection has been aged in bourbon casks. 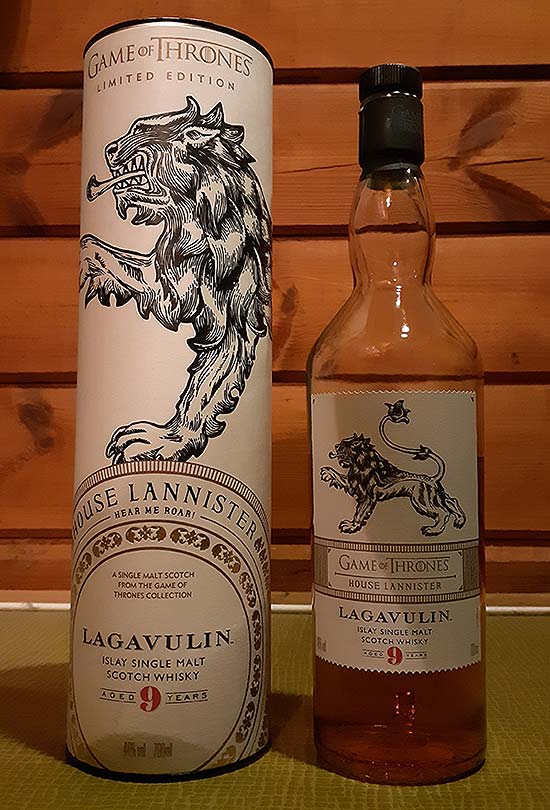 Okay but not living up the distillery standards

Lagavulin’s GOT version turned out to be something I was expecting. It isn’t bad – why would it be because it’s a Lagavulin? But still a mild disappointment because it isn’t great. And in my book, Lagavulin has set its standards so high, that their whisky has to be great.

GOT Lagavulin is okay but not good or great. Surely overpriced but if you want to pay extra for Game of Thrones trademark, you should go for it.

Matured in:
Ex-Bourbon caks
Colour: Deep amber
ABV: 46%
Nose: Slightly smoky, lots of ash. Maritime notes are there but not as strongly as with the 16 year old Lagavulin or with other past expressions. Hints of caramel and oak.
Taste: Vanilla and peat dominate. Hints of burnt candy and spices but mostly it’s vanilla mixed with peat.
Finish: Oily with peat and delicate smoke. Bit salty and sweet. Hints of caramel.
Balance: Like mentioned, an okay dram. Quite balanced, nothing really standing out. But usually Lagavulin whiskies offer strong characteristics which this whisky doesn’t. Steady mixture of peat and sweetness but bit overpriced.