The story of Lot No. 40 Canadian Rye whisky is interesting. Making of this rye whisky started in 1990’s but it was discontinued early 2000. Which created some negativity among whisky enthusiasts who preferred its bold rye notes much more than the usual mellow Canadian rye whisky notes.

Regarding this, let’s quote Distiller.com about Canadian rye whisky regulations:

“Distilled in Canada and aged in barrels for at least three years; often (but not always) Canadian whiskies are blends of corn, barley, and rye whiskies which were distilled and matured separately. Traditionally, Canadian whiskey is called “rye”, although no minimum percentage of rye-grain whisky is required in a blend.”

Lot No. 40 has created some hype in the past, so it was relevant to bring it back to markets in the age of (rye) whisky appreciation.

Maybe the time is right for this celebrated Canadian whisky – it didn’t sell that well in the ’90s but times were different back then. I guess ordinary consumers bought what was handed to them, or their taste was just different.

With little exaggeration: smooth whiskies are out, whisky drinkers want more character. At least this is my point of view, general sales figures might prove differently.

I could use this with anything – like Canadian Bacon

Re-released in 2012 by Corby Spirit and Wine Ltd. (same company which produces Wiser’s), Lot No. 40 had some nice success which is apparently continuing. At least when looking all the prices it has won. And the fact that you can even get it from Finland! If non-local alcohol makes it to Finnish markets, it has to be very global, right?

Distilled by Hiram Walker Distillery, they use a specially designed copper pot still in which they insert the alcohol after column distillation. It gives Lot No. 40 its rye-forward but fresh character. Just like the new oak barrels add that freshness.

Canadian whiskies require the 3 years minimum of maturation but this rye contains whiskies much older than that. Youngest starting around seven years, according to Hiram Walker’s master blender Dr. Don Livermore. That’s another statement of quality, with rye whiskies 7 years of maturation is quite old.

This rye is like Canadian Bacon. I could use this with anything. Any recipe imaginable, this rye whisky could go with it. It’s just so easy to drink but at the same time, bold enough. Goes well especially in rye cocktails. By Googling you’ll find plenty of those.

Mash bill:
90% rye, 10% malted barley
Maturation:
New oak barrels
ABV: 43%
Colour: Dark amber
Nose: Minty and fruity rye. Like Juicy fruit bubblegum along with young but fresh rye notes. Orange peel and hints of cardamom.
Taste: Peppermint with powerful and fresh rye notes. Hints of exotic fruits and nutmeg. Sugary and peppery at the same time, with touch of vanilla.
Finish: Quite spicy, with a harsh rye kick and black pepper. Bit too one sided compared to the aromas and taste. Bit charry with some cinnamon notes as well.
Balance: Exotic and fresh rye. Mix of fruity sugars and peppery spices. Along with fresh rye. Good job Canadians! 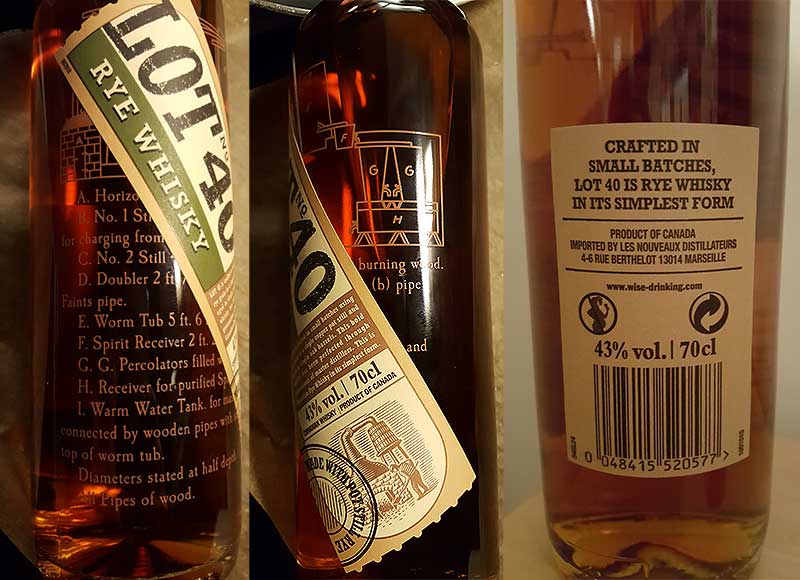