After Michael Jackson, the famous whisky and beer writer, passed away, Whisky Magazine and Doug McIvor (Berry Bros & Rudd’s spirits manager) decided to make a blend from his impressive whisky collection. The Michael Jackson blend was first available at Whisky Live London in February 2009 and part of the proceeds went for the Parkinson’s Society.

As a writer, his knowledge and style were unique and legendary. Even though this whisky isn’t anything great, it is very unique. So in a way, it does reflect Michael Jackson’s legacy. Whisky Magazine collected the bottles from his vast collection and separated them into unopened and opened bottles. After that, they created this blend using all the opened bottles, approximately 1000 bottles.

So, we’re talking about as unique whisky you can get. For me, probably the weirdest whisky, I’ve ever tasted. Especially the finish, offering a cool, slightly minty breeze, which comes so late, that my focus was already at something completely different matter. The breeze hits seconds after the last hints of aftertaste. Another weird thing about this blend, every step of the whisky seems to depart from the other very much.

And let me repeat myself: in my opinion, this isn’t anything great, when it comes to taste. But this surely is an adventure. I’m sure that the “Beer Hunter, Whisky Chaser” Jackson would appreciate it, because it does leave a mark. I will remember it much better, than the other whiskies with the same kind of score.

Being “out of balance” saves it from being just a mediocre whisky. Otherwise I wouldn’t spend this much text on it. Full of surprises in a disorderly world, pretty much what Alice experienced in Wonderland.

Taste: Not as sweet as the nose suggests. Toffee, tea and spices. A bit creamy,

Finish: Very long with malt and mild sherry. The aftertaste offers a minty surprise at the very end. This whisky wants to keep on talking.

Balance: Not greatly in balance but like I said before, it actually saves this whisky from being ordinary. Definitely gives you something to recall. 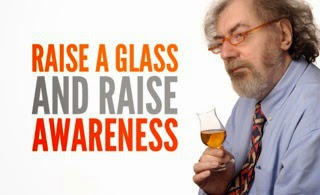