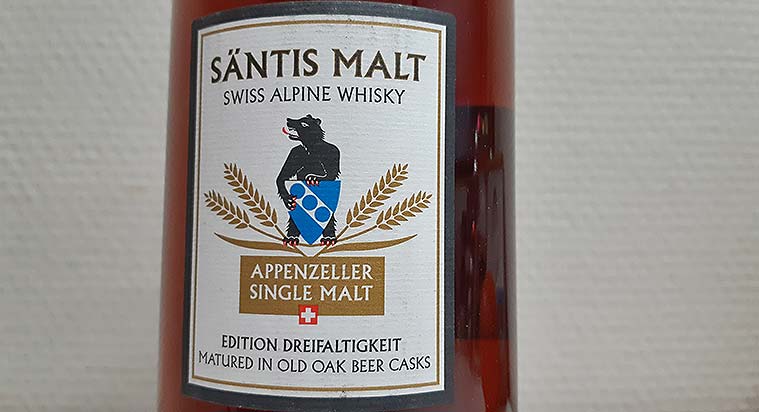 Säntis Malt Edition Dreifaltigkeit is a cask strength peated whisky from Switzerland. This beauty has been matured in old (60-130 years old) oak beer casks that were smoked with oak wood by the “Swiss Highlander”. Säntis whisky is a product of Locher brewery – famous for making a wide range of beers in Appenzell, Switzerland. They take their water from the Alpstein Mountains and peat from the Upland Moor.

Edition Dreifaltigkeit (The Trinity) gets its name from a local mountain peak. This dram is stated to be lightly peated. Still, strongly peaty and smoky, it gets it all from various stages of smoke treatment in the process. The malt is smoked in three different ways: beech-smoked, oak-smoked and peat-smoked (done in two stages). Smoked in two woods, the barley is then resmoked with peat from the local Appenzell Highmoor.

The brewery started distilling whisky in 1999 and ever since then they’ve released a limited 2000 bottle output per year. Limited because of the casks, that’s being used for maturation. Before maturing whisky in them, the casks have been used for mature beer for a century in a process called lagering. Very unique but not exhaustless. 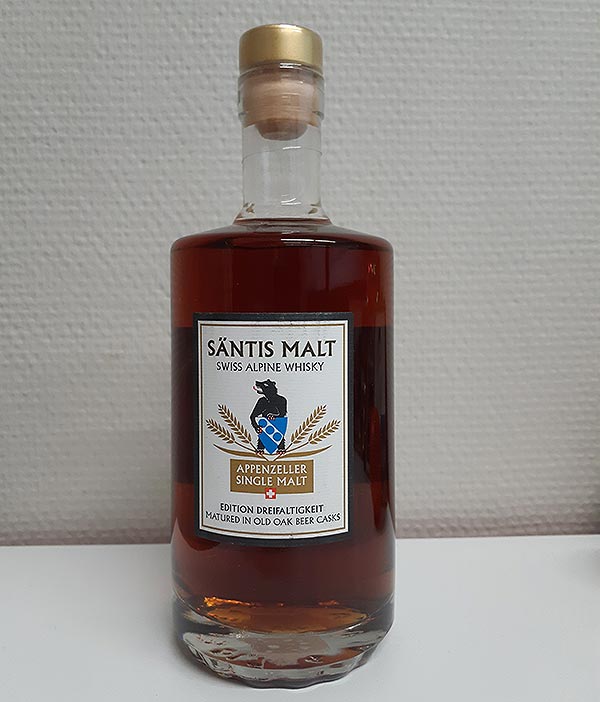 Säntis Single Malt Edition Trinity is a Swiss not to miss!

Trippy but great – BIRDMAN with a bear on his chest

So unique and bit weird, but very good and well acknowledged, award-winning single malt whisky – if this was a movie, it would be Birdman.

Matured in:
Ex-Beer oak casks
ABV: 52%
Colour: Dark red ale
Nose: Very fascinating nose for a whisky – reminds me of Schlenkerla Rauchbier, German smoke beer. With the exception, that Schlenkerla has more ham and Säntis is more like mettwurst (uncooked German sausage). Though, there’s cold smoked ham as well. Sweet and spicy, like a mix of cinnamon and spicy sherry with peat on the back. And what felt like spicy sherry, turns out to be more like malted dark bread.
Taste: Delicate and warm spices with soft oiliness. Sweet and bit dry. Ham and mettwurst, malted barley, ale and peat. Bit fruity as well, with oranges. All in a strong but smooth way. Great palate.
Finish: Mildly dry, like bitter ale. Some caramel sweetness. Red grapefruits, when given time in the glass.
Balance: This single malt whisky from Switzerland is truly amazing. One of a kind at the moment. Like Dominic Roskrow put it in his book 1001 Whiskies You Must Taste Before You Die, “if you like smoke in abundance, you don’t want to miss this Swiss”

Jim Murray chose Säntis Malt Edition Dreifaltigkeit aka The Trinity as Whisky Bible 2010 “European Whisky of the Year” with a score of 96,5.

Check out my articles about: 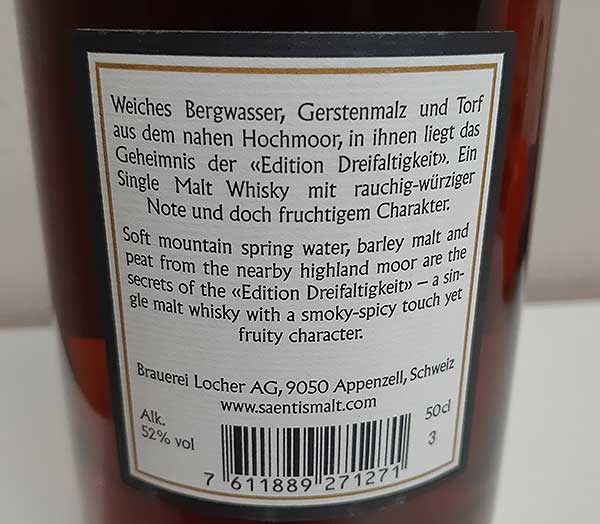