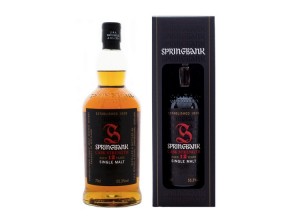 The one I got to sample was batch 10, the 2015 release, matured in a combo of 70% Ex-Sherry and 30% Ex-Bourbon casks. With an alcohol per volume level of 53,2%. Springbank 12yo Cask Strength’s malt is has been dried over a peat fire and then over hot air.

There’s been much hype around the previous versions of this Springbank. I don’t know if batch 10 is in the same level as its predecessors, I have no experience. But after this version, I wish I had. This one feels great, I can imagine it being like a good sequel, living up to the greatness of the trilogy. And doing it with fresh notes and some kind of new perspective, yet being true to the predecessors.

That’s why this whisky brought The Bourne Ultimatum movie into my mind.

Matured in:
70% Ex-Sherry and 30% Ex-Bourbon casks
Colour: Dark amber
Nose: Fresh with citrus notes and wee peat smoke. Like a squirt of fresh juice from a grape. Toffee and licorice stay on the back.
Taste: Honey and toffee, small hints of pepper. Citrus is also present, first in the form of fresh grape or lemon, then as sour lemon peel.
Finish: Bitter, ginger and mint dominate with citrus staying in the background. Very fresh, and did I mention bitter?
Balance: Good dram, not the most balanced one but still great because it has character. Offering strong and versatile notes, changing from fresh to dark notes and back to fresh notes along with bitterness.

And batch 9 isn’t bad in his book either: