The Ultimate Glenrothes 1995 17YO review

Talisker 10 year old is truly a seaside dram. Powerful single malt whisky from the Isle of Skye, filled with coastal notes and strong character – classic Scottish Island dram. I am not a big fan of seafood and if you have to name one whisky that resembles seafood, Talisker 10yo would be it. So it was not a surprise, that my first impression for it many years ago, was almost like loathing.

Matured in American ex-bourbon hogsheads, filled with unique kind of fishy palate, it was a weird whisky in a bad way. I only gave it a score of 76 points and felt that even that was charity. Many years later, it was time to revisit this Carbost based Classic Malt owned by Diageo. 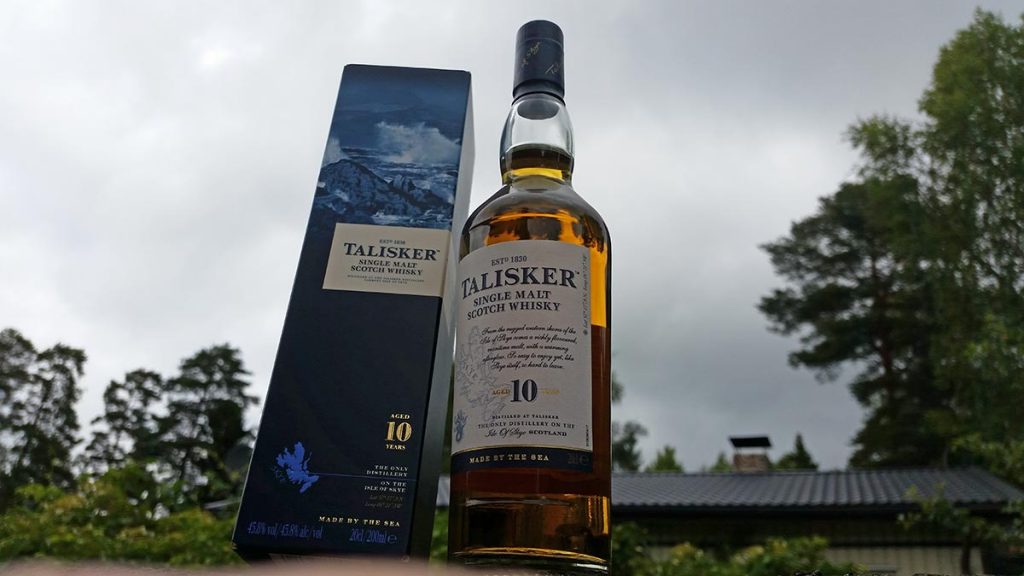 Creating some HEAT at the Scottish Islands

I have to make a reference to the movie Heat. Not only does Talisker offer heat but both, the movie and Talisker 10yo are in my opinion, generally very much liked. Both have ingredients, which I usually like. Heat has great action scenes and suspense between De Niros’s and Pacino’s characters. Pacino even happens to be my all-time favorite actor. But still, I didn’t enjoy it as much as I thought I would. Same thing with Talisker – heavy, coastal character with big aftertaste. A dram I usually like, but the coastal feel is too heavy for me.

This whisky is on the verge of okay, I even made the score higher after revisiting it. I had grown to like it a bit more than I did before. But I still aren’t ready for all the big maritime character, this whisky has to offer. Olives and seafood unfortunately are not my thing. One of my buddies describes Talisker 10’s taste dusty, but I didn’t find any taste like that.

But remember, the movie Heat and Talisker 10 year old single malt are both classics of their kind. Filled with character and richness. So go see the movie and taste this dram, if you haven’t yet! This is just a matter of taste.

Matured in:
Ex-Bourbon hogsheads
Colour: Pale straw
Non-chill filtered, no added colour
ABV: 45.8%
Nose: Salty peat is on the back while heavy notes of liquor with spices take over. Breeze of sea air is present of course. Aromas of seafood, like stuffy oysters along with salty olives. The nose is quite all right.
Taste: Combination of sweet and spicy notes. Peppery and dry with syrup and ginger. The seafood feel is very strong again. And again, oysters with olives. And some peat. Rich, but the palate. doesn’t suit for me very much.
Finish: Peppers exploding in the throat. Warming with barley and some sweet spots as well. This really is an aftertaste to chew on. There’s lots of different flavors, my senses aren’t sophisticated enough to spot all of them. Peppery peat, with barley and lots of maritime notes.
Balance: Complexity in a strong package. I can imagine people being big fans of Talisker 10yo. It is versatile and characteristic, spicy and coastal. Whisky with a big finish, easy to fall in love with. But like many strong characters, it splits opinions. And didn’t suit for my taste so well. 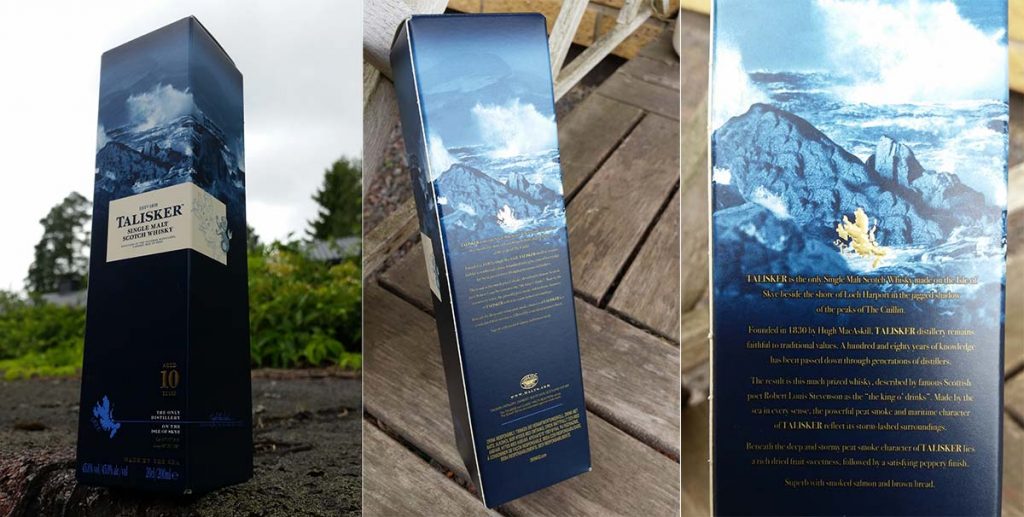 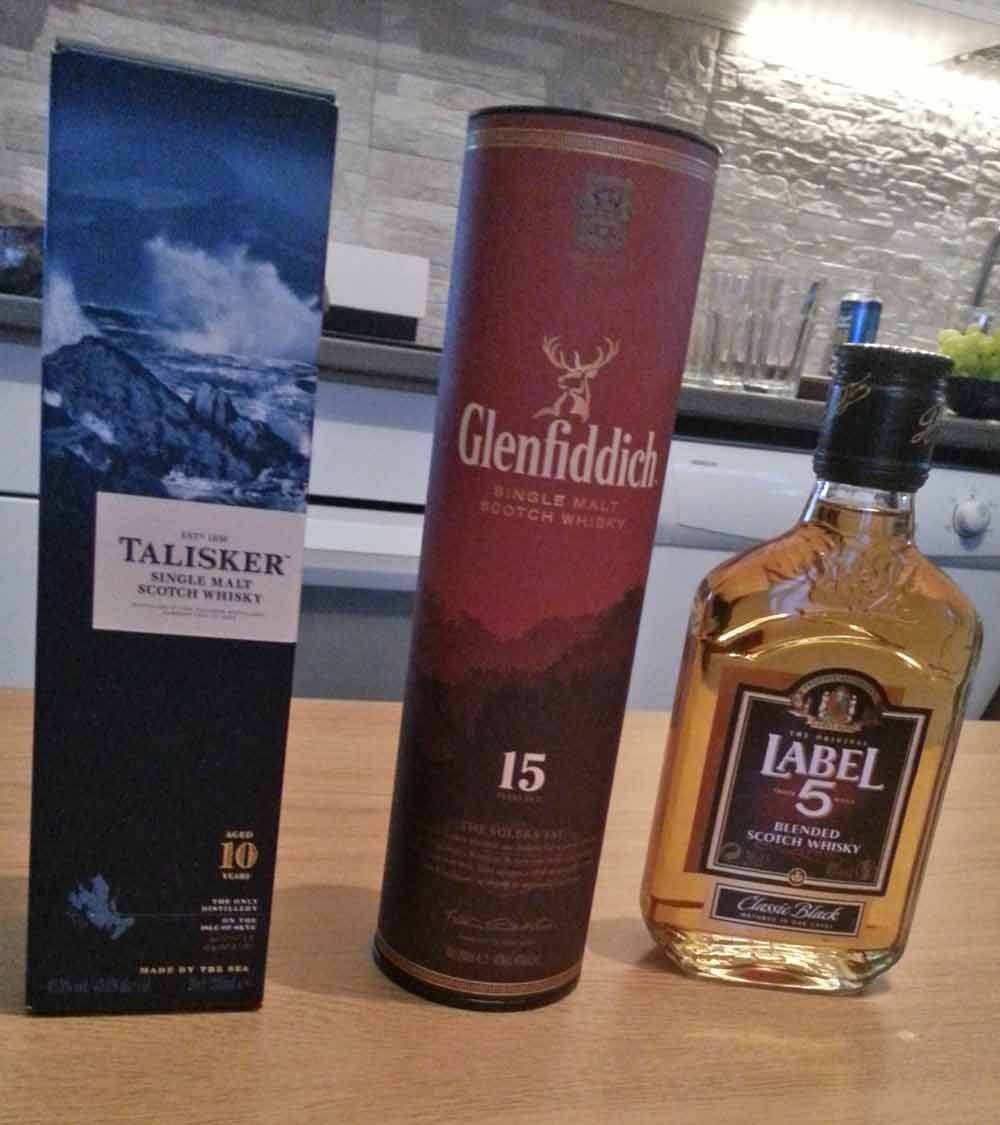 Talisker 10 isn’t the only whisky, I’ve grown more into. Glenfiddich 15yo was another bad whisky in my book, before it managed to turn my head around a bit.

Old bottle of Talisker 10YO on the back.