Writer’s Tears is owned and bottled by Walsh Whiskey Company, who also own the Irishman brand. Writers Tear’s is a blend of 40% Irish Pure Pot Still (also known as Single Pot Still) and 60% Single Malt Whiskey, triple distilled like Irish whiskeys usually are. Blended whiskey without grain whiskey sounds tempting to me.

Long time ago, Irish whiskey blenders decided not to use grain whisky like their Scottish counterparts. They maintained pot still whiskey dominance in their blends. I think it’s been a good decision – Writer’s Tears is another fine example. Like Jim Murray’s Whisky Bible states, this whiskey is a great salute to the last century where spiced Single Pot Still whiskey was married with floral Single Malts. The name is also a great tribute for the golden age of Irish writers back then.

Writer’ṣ Tears has been matured in American Oak Ex-Bourbon casks. It is an International Spirits Challenge Gold Medal winner and it was featured in Ian Buxton’s book called “101 Whiskeys To Try Before You Die”. It also received 93 points by Jim Murray. I must add, even though not praising it as much, we are talking about bang for buck Irish whiskey here.

Story behind the name

Irish writers used to suffer from “writer’s block”, like writers tend to do no matter where their origins are from. Well, anyway, it was said that when Irish writers cried they cried tears of whiskey. So what was the most common way to heal “writer’s block”? Comfort and inspiration was usually taken from “the water of life” a.k.a whiskey. Whiskey relaxed and helped many writers to overcome the block and produce inspiring works of poetry, prose or plays. Writer’s Tears Whiskey, is a tribute to those mighty Irish writers.

Made with the same old tradition which has been existing in Ireland for hundreds of years, Writer’s Tears is a good Irish blend without grain whiskey, distilled three times and non-chill filtered. I like it.

Matured in:
Ex-Bourbon casks
Colour: Amber
Nose: Starts with sweet orange marmalade. Very mild aromas of pine, grass and fruits. Very floral. Blooming like early spring.
Taste: Mildly bitter and crispy raspberry jam. This one needs to rest in the glass. Toffee and light cinnamon apple notes rise when you let it rest.
Finish: Bit of red fruits and barley. Green fruits come late in the aftertaste. Bit spicy and bitter with hints of toffee.
Balance: Light and crispy dram which tones down a bit when you give it some time. Bang for buck Irish whiskey, which by the way, is quite common statement by me. Irish surely know how to make whiskey. 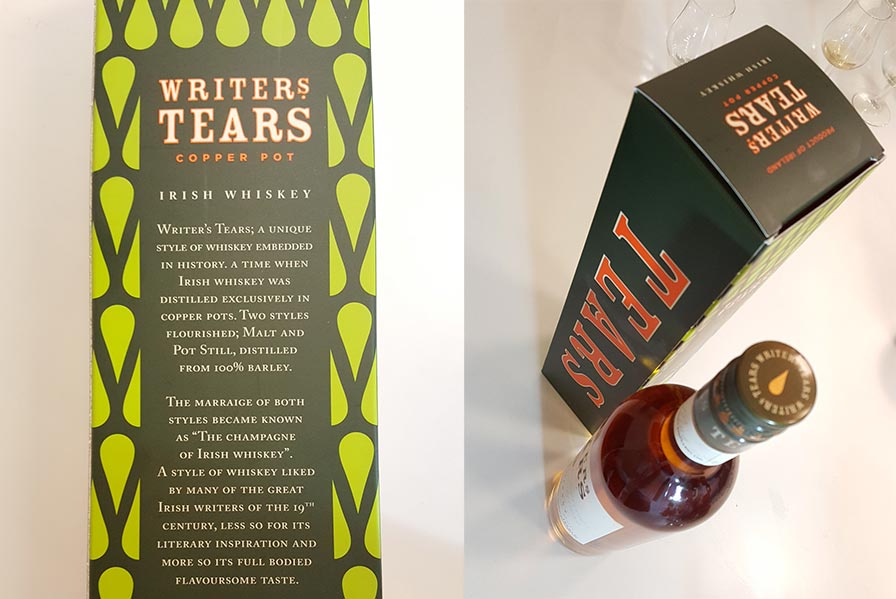