I just have to make a quick post about blending whisky from my own cabinet, again. Last time I did it, was because I had bumped into Ralfy’s vlog tip about blending bad whisky with a good one, to make the bad taste better.

This time I happened to blend together two good whiskies, by accident. One evening, I had sipped a small dram of Aberlour 12YO Non Chill-Filtered. I left my drink on the kitchen table for a while, minding my own business. Needless to say, I don’t have the memory of an elephant: I had not put on the kitchen light, and while it was dark, I forgot that there was wee bit Aberlour left in my glass and started to pour Mackmyra Brukswhisky. As soon as I started pouring my new dram, I realized that there was still some Aberlour left.

That was the beginning of my new innovation. Blending good whisky together. I decided to go with my new blending of two good malt whiskies. What would be the point in not enjoying that dram, even though it might be against some snob whisky etiquette, which some whisky enthusiast somewhere started. And by snob whisky etiquette I mean the elitist attitude you bump into from time to time: people telling you what you should or should not to experience and do with whisky.

Turns out that Aberlour 12YO Non Chill-Filtered and Mackmyra Brukswhisky go together even better than they taste separately. I must point out that I like both of the drams as they are. But this new mix tasted even better. A marriage made in heaven for my taste buds. That’s why I decided to blend them together to an empty bottle bottle of Blanton’s, which by the way, is like a cool whisky decanter. Sláinte! 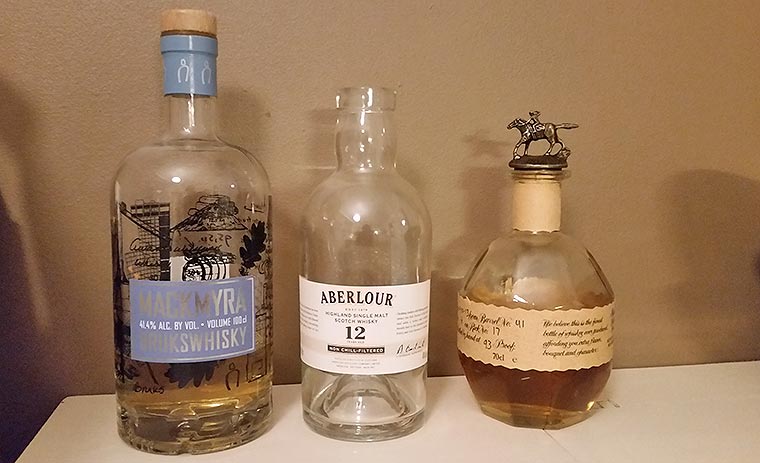 The feature image was before and this is after: 1/3 of Aberlour and 2/3 of Mackmyra in an empty bottle of Blanton’s

To prove that I am not the only one doing this, here’s Ralfy (again) blending together three single malts. These are from the same distillery (Springbank), so Ralfy’s blend remains as a single malt, while I was doing a blended malt. Ralfy blends Springbank, Longrow and Hazelburn, calling it playfully: Bankrowburn.

Like Ralfy says, it takes balls to do it. But it’s nice to experiment with whisky, even with good whisky. Start with small samples so you won’t end up ruining a bigger batch of good malt whisky.