Lemmy is the new Jack and Coke

It’s official, from now on, you can call Jack (Daniel’s) and Coke Lemmy. 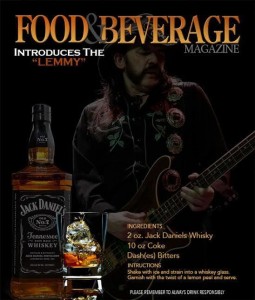 There’s been lots of Lemmy petitions around the internet lately. For example, last week Metal Injection were told to push things forward for getting heavy metal to be named after Lemmy. Fans also started petitioning that the favorite drink of the late Motörhead frontman Lemmy Kilmister, Jack & Coke, would be renamed after him. The renaming in his honor has got over 40 000 signatures currently.

Food & Beverage Magazine was in favor for the new cause. They officially renamed Jack Daniel’s and Coke to Lemmy, in honor of one of the greatest metal band frontmen there ever was. Blabbermouth reported, that the owner and publisher of Food & Beverage Magazine, Michael Politz was thrilled about it. Here’s his quote with some rock star name dropping as well:

“We are honored to represent the industry and bring the moniker The Lemmy to every bar in the world! Owning a rock club with Anthrax’s Scott Ian and Alice In Chains’ Jerry Cantrell gave me the chance to meet Lemmy and experience his legend myself.”

So, what’s in the mix? For people, who don’t know the drink so well, the official mix contains:

The feature image is from a Valio commercial, which Lemmy did just before he passed away. You can see the Valio (Finnish milk company) tribute video below. They didn’t make the commercial as planned since Lemmy died. They decided to go on with this tribute:

Check out my articles about: