Longmorn 16 year old single malt whisky was released to replace their 15 year old as part of the relaunch of Longmorn distillery. The discontinued 15YO by the way, is a high rated single malt in Whisky Connosr community – with an average of 91 points it used to be even in the top 10 (16th at the moment). The reputation of the 15YO really helps Longmorn’s desire to be a super premium single malt maker brand. My only taste of Longmorn before this was a bottling by Murray McDavid, which was brilliant. 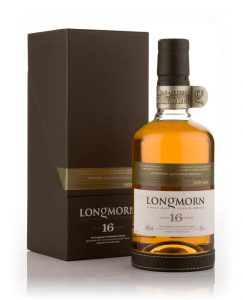 For a long time, Longmorn has been a popular component for whisky blenders. Longmorn uses water from local springs and gets the barley from Moray, peat from nearby sources. They used to get the power for the entire distillery from a large water wheel, which is still located in the distillery, no longer in use though. Founded in 1893, Longmorn has had many owners: The Glenlivet Distillers Ltd. in 1970, Chivas Brothers in 1978 and 2001 it was acquired by the French Pernod Ricard Group.

Longmorn 16 year old single malt has been matured in Ex-Bourbon and Ex-Sherry casks. It got 2 silver medals at the San Francisco World Spirits Competition in 2008 and 2009. It earned Double Gold at the same competition in 2014.

This bottling by Longmorn gives me mixed emotions. There’s lack of complexity and lots of hot notes. Complexity isn’t always something that automatically makes a whisky good. Hotness is usually bit of a turnoff for me – but Longmorn 16YO plays both parts well. Still, it’s bit stuffy and dusty. So when I’m about to score it under 85 points, there suddenly comes another layer, whether it’s a layer of warming hot spices or just some fruity hue. And bang, Longmorn 16YO has won me take its side.

There’s one movie that gives me similar feelings – the classic Michael Mann movie called Heat. A very acknowledged film with one of my all-time favorite actors in it, the great Al Pacino. Still, there’s lots of things I hate about the movie, even though I do like it. And the name of the movie suits well for this whisky – Longmorn 16YO packs heat very much!

Matured in:
Ex-Bourbon and Ex-Sherry casks
Colour: Golden amber
Nose: Starts with strong fresh peppermint. Salty licorice, raisins and some dry oak tannins. Like a squirt of fresh juice from an orange. Few drops of water add nice fresh floral notes. Let it rest in the glass for a while and you’ll get fresh cut hay and blooming spring meadows.
Taste: Very dry with some spices and a bit dusty feel. Nutmeg and crispy berries. Water adds nice little layers – hot black pepper, tannins and wee fruity tones.
Finish: Warming spices and dry oak. Gets very peppery with addition of water. Quite fast and compact aftertaste. This is probably the hottest whisky I’ve encountered so far, even a dash of chili is present.
Balance: There’s not much complexity and the taste and aftertaste do feel a bit stuffy. Then again, this musty feel isn’t all that bad and if you add few drops of water, everything gets better. Give this dram some time to open up. Aromas are definitely the best part – lack of richness especially in the finish drops the score a bit. Did I mention it’s hot?