As a big fan of Big Peat, I had to try out Scallywag by Douglas Laing as soon as it was launched. Scallywag is a vatted malt made from Speyside whiskies, such as Mortlach, Macallan and Glenrothes. Most of the whiskies in this small batch release come from Spanish Ex-Sherry butts, but there’s also some Ex-Bourbon casks used in the maturation as well. 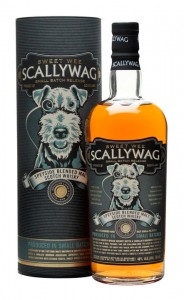 Master of Malt said that Scallywag is like a trusty sidekick for Big Peat. I agree, this Fox Terrier wearing a monocle is a good follow up to Big Peat.

This must be that cheeky dog from FRASIER

Scallywag Small Batch is another character in a bottle, literally by Douglas Laing. This blended malt has lots of sherry sweetness, which is occasionally balanced by the bourbon cask influence. Douglas Laing has yet again managed to create a characteristic vatting. What’s inside, really does fit with the label: a cheeky but smooth terrier. Truly, a big sidekick in a small form.

Scallywag is like a roller coaster ride, full of surprises and strong character. Right at the start it gives you über-sweetness. Just what I was expecting, when thinking of Big Peat and its über-smoke. Coming from the makers of Big Peat, so it has to be über-something, right? And when it’s a Speysider, it has to be sweet.

Scallywag changes its course roughly, though. So much of a character, that it’s occasionally repulsive for even me. It can be mellow and tasty, but overly sweet and in the end, very bitter. Scallywag is easy to reference, not with movies, but with TV stars. It’s just like Eddie a.k.a Moose, the cheeky terrier from Frasier.

Matured in:
Ex-Bourbon casks and Ex-Sherry butts
Colour: Golden copper
Nose: Sweet and yet again, sweet – and did I say sweet? Sugar frosting with ginger candy and sherry. Drop of water adds a kick of warm spices like cinnamon and cardamom.
Taste: For a very brief moment, the sweetness disappears. Vanilla and cinnamon dominate the palate. Just like Big Peat, this dram has a Christmas feel, suitable for Christmas table for sure. Smooth but powerful whisky.
Finish: Bitter notes take over by force. Oak with spices and some dark chocolate. Sherry influence is present as well.
Balance: Smooth, pleasant and versatile. The versatility is too big. Aromas, taste and aftertaste are all opposite to each other, which is partly refreshing, partly disruptive. Big character, that’s for sure, like you can expect from Douglas Laing.