Four Roses Kentucky Straight Bourbon Whiskey, a.k.a the Yellow Label regular bourbon by Four Roses distillery. This is a legendary American whiskey, not by taste but by conspicuousness. Four Roses has to be one of the most well-known US whiskey brands along with Jack Daniel’s. At least I’ve known it all my adult life, long before I became an whiskey enthusiast. 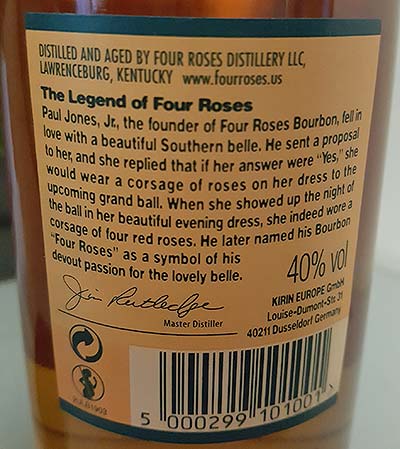 According to Four Roses website, their regular bourbon has a surprisingly long list of awards and accolades:

Four Roses Kentucky Straight Bourbon is in my opinion, nothing special, but a steady and smooth American whiskey for bargain hunters. I myself prefer Buffalo Trace, when looking for quality bourbon with a cheap price tag. But Four Roses isn’t bad either, surprisingly tasty for the price you’ll be getting it.

And a great gift idea for Valentine’s Day:

Classic post from #reddit “I bought my wife a dozen #roses for valentine’s day, she was not impressed” #FourRoses #bourbon #American #whiskey

Mash bills:
75% corn, 20% rye, 5% malted barley and 60% corn, 35% rye, 5% malted barley
ABV: 40%
Colour: Amber
Nose: Smooth with corn dominating and a touch of rye on the back. Light and fruity,
flours and vanilla.
Taste: Crispy green apples and light fruity notes. Sweet honey with a wee spicy kick from the rye.
Finish: Touch of rye is present, bit spicy with honey and vanilla.
Balance: Overall, an okay bourbon in its price range.