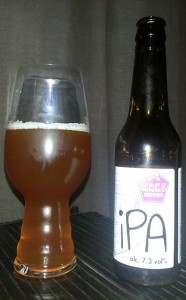 Maku Brewing IPA, also known as Maku Indian Pale Ale, is a great showcase of Finnish craftsmanship. I just had to make a “shout out” to them, even though the beer doesn’t get full ten points from me. Usually that’s the reason why I post a beer review.

We are talking about very good craft brewers from Finland. Maku Brewing is a small brewery from Tuusula, Finland, established in 2014. Their IPA is definitely worth a try – a positive and fresh ale, offering great experiences for people who love craft beer. They recently made a newly labeled Pale Ale as well, “an Ale from the Thousand Lakes”, the Amorphis Pale Ale. Which suits more than fine for a Amorphis fan like myself.

Not quite the full 10 points but almost there, the strong bitterness took away one point – bitterness, which usually determines a great IPA but for my taste is a bit too heavy.