J.P. Wiser’s whisky brand is the oldest continuously produced Canadian whisky since it was established in 1857. The whisky is being produced at Windsor, Ontario by Hiram Walker & Sons Limited distillery.

Like the name states, this whisky has been matured in three different barrels: reused American oak, Canadian rye barrels and first-fill bourbon barrels. Traditionally Canadian whisky is called rye even though no minimum percentage of rye grain is required in a blend. So based on that the effect or rye on those former Canadian rye whisky barrels might be light.

This Wiser’s is apparently one of master distiller Don Livermore’s favorites. I’m sorry to say, it doesn’t rise anywhere near to my favorites. Of course I kind of expected that. Being a blended whisky which I usually don’t prefer, and having a small portion of rye whisky (which I prefer) in it.

Mash bill:
90% corn, 10% rye
Maturation:
American oak, Canadian rye whisky barrels and first-fill Ex-Bourbon barrels
ABV: 40%
Colour: Dark reddish amber
Nose: Very sweet nose, with corn and rye notes. Corn is slightly more powerful. Hints of vanilla and toffee.
Taste: Caramel and dark chocolate. Oak starts to dominate the longer you chew on it. Hints of vanilla. Peppery towards the end.
Finish: Oak and spices, quite bitter and fast aftertaste.
Balance: Aromas are promising but palate won’t deliver the same kind of balance. But for the price you’ll be getting this one, it’s decent.

Looking for whisky glassware? Check out my articles about: 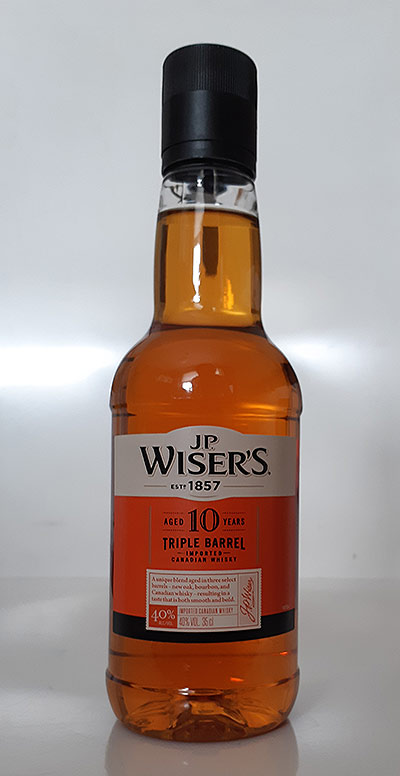