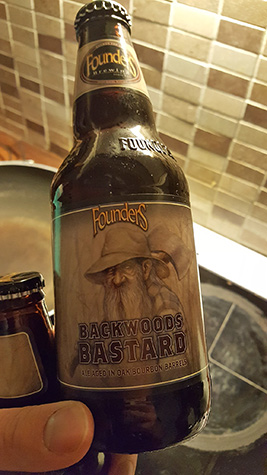 Founders Brewing Company is located in Grand Rapids, Michigan USA. They’ve come up with a beer matured in whisky casks. Founders Backwoods Bastard Ale sounds and looks great in every way. It is a strong Scotch Ale, with high ABV of 11,2%. It is Founders flagship beer called Founders Dirty Bastard Scotch Ale, matured in bourbon barrels for a year.

Before I go on about the fact that this ale was a disappointment for me, I’ll make it clear: it has gotten some great reviews. So if you are a fan of whisky or bourbon matured beers, go and have a taste of this. My judgement is only based on my own preferences – usually not a fan of dark, yet sweet beers. Which Founders Backwoods Bastard Ale happens to be.

So this most likely is just a matter of taste, not a matter of bad production. RateBeer for example, gives an overall of 100 points at the moment. When reading customer reviews, people seem to really like this whiskey matured ale.

Founders Backwoods Bastard Ale feels full but very sweet, too sweet for my mouth. There is some good texture coming from the base, Founders Dirty Bastard Scotch Ale (which I actually like). And there definitely is that whiskey feel. Which is a good sign, because I’ve tasted whiskey influenced beer without getting a feel of whiskey in it. I guess my expectations were much higher with this ale. So sadly, this didn’t become one of my favorite beers, such as Ola Dubh 12.

Beer type: Scotch Ale
Bitterness: 50 IBU
Colour: Reddish brown
Nose: Yeast hits with power, malty and sweet. Red berries and porridge.
Taste: Very sweet and red, slightly fruity. The bourbon influence is very evident, even though the whisky feel comes with slight blended note(!?). I guess it’s a bit bourbony sweet as well, but for some reason the whisky sharpness presented in this ale feels like grain whisky. Most of all, this ale is just über sweet, way too sweet for my taste.

Even though this ale was a disappointment, I have to review it because of its whisky influence.