Aecht Schlenkerla Rauchbier Märzen is a stunning smoked German beer from Brauerei Heller in the town of Bamberg. A beer so full, that you can forget your afternoon snack for a while. It gets the smoky flavor and aroma by exposing the malt to the intense smoke of burning beech-wood logs at the Schlenkerla’s maltings. Brewed together with good hops and matured in 700 year old cellars. This is a smoky beer is not to be forgotten.

The name comes form Frankish vernacular, in which “schlenkern” is an expression for not walking straight, like a drunken person usually does. Apparently one of the former brewers had been in an accident and due to that, was walking in a funny way. It might have been because of the beer, go figure. But because of the brewer’s silly walk, the beer was called Schlenkerla – the little dangler. So the tavern got the same name from the residents of Bamberg. And it has remained that way even though the sixth generation of brewers are making the beer.

Full smoke and malt are very much present in Schlenkerla Rauchbier palate. The first time I tasted it, I was stunned about the heavy aromas. Reminds me of whiskies like Big Peat or the Swiss Säntis Edition Dreifaltigkeit with the nice smoky ham scent.

The taste is dominated by smoke too. Roasted, malty and sweet, creamy, mildly bitter with hops. Great full body, which tastes great. 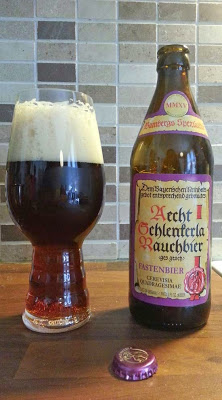 This came to Finnish liquor stores this Easter (2015), offering a rare treat for people outside Bamberg. It is usually being sold only during lent from Ash Wednesday to Easter, served only from the wooden keg at the Brauerei Heller. Fastenbier is an unfiltered smokebeer and the original Schlenkerla Lentbeer during Easter.

According to ratebeer.com, it’s been the best smoked beer in the world in 2012, 2013 and 2014.This lentbeer has natural cloudiness given by bottom-fermenting yeast. Offering great aromas of smoke and little bit of hops. Full body with lots of malt and yeast and some bitter notes. Because of the nourishing yeast, this Lentbeer has the “Brotzeit already included”, which means afternoon snack for German.

December 2015 Finnish liquor store Alko offered another Schlenkerla treat (which they have offered before). They made Aecht Schlenkerla Urbock part of their Christmas selection. A decision, I took with lots of joy. 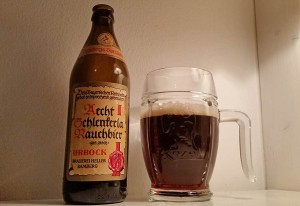 Urbock by Aecht Schlenkerla is a full bodied smoked bock beer. They brew it in the summer time and mature it for months in their ancient Schlenkerla rock-cellars underneath Bamberg. Served freshly from the oakwood cask tap and in the Schlenkerla brewery pub, and through exports to USA or Finland for instance. You can get it from tehir webshop as well. This bock is very similar to the classic Märzen Rauchbier but it has a little bit bigger alcohol per volume level and it is probably a little bit fresher. All in all, another superb performance by this German brewery.